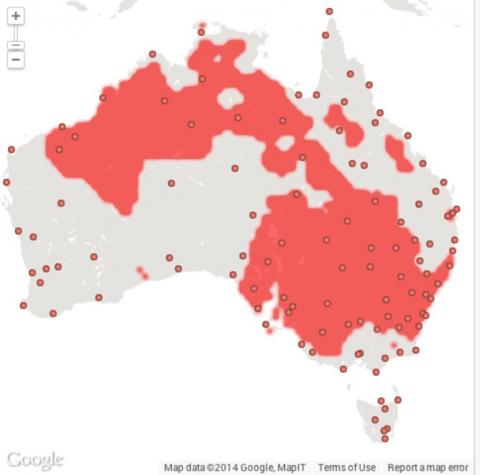 By Sarah Perkins
This story first appeared in The Conversation

If you’ve stepped outside at lunchtime in Sydney over the past few days, you’d be forgiven for thinking that it was more like early summer than the beginning of winter.

On each of the past 23 days, the temperature has reached highs in the mid-20s, exceeding 27C on May 25. This is characteristic of November, not May.

With the exception of May 3, no daily maximum at Sydney’s Observatory Hill has been below 20C. So far, May’s daily maximum temperatures have averaged just under 4C above normal. May 25 was an exceptional 8C warmer than normal.

These anomalously warm conditions are not confined to Sydney either – much of eastern Australia has experienced heatwave conditions during May, relative to the usual conditions.

Heatwaves, defined as sustained periods of unusually warm weather, can obviously occur during the cooler months as well as the hotter ones. Winter heatwaves – also called warm spells – are not as widely appreciated as summer ones, partly because their impacts on humans, animals and infrastructure is minimal.

Indeed, winter warm spells can be quite enjoyable. They might mean not needing to turn your heater on at home, or not wearing a coat on your way home from work, or even spending some time soaking up the sunshine on your lunch break.

But because of their attractiveness, warm spells often fly under the radar of most people’s perception of climate change.

Yet more frequent and longer warm spells in the cooler months is exactly what we expect to see as our planet continues to warm due to human activity.

Winter warmth on the increase

This is not just happening in the warmer parts of the year and the warmest parts of the day. In fact, over time the cooler parts of our day have been getting warmer at an increasing rate. Global records show this warming of minimum temperatures over 24 hours has accelerated at a quicker rate than the increases daytime maximum temperatures. That is why the number of hot nights are increasing in intensity and frequency at faster rate than in the daylight hours. Likewise in the cool part of the year, warmer than normal winter days (whether they are part of a warm spell or not) are also increasing further and faster than the extreme heat we have been experiencing in summer days.

These findings are covered by the Intergovernmental Panel on Climate Change’s Special Report on Extremes, as well as its recent Fifth Assessment Report. Global climate models predict that these trends will continue, including in Australia.

Recent research has also shown that trends in extreme temperatures did not slow down during the warming“hiatus”. Extreme global temperatures still continued to trend upwards between 1998 and 2013, despite global mean surface temperatures apparently taking a break from warming.

Some people will find it hard to see any downside to the increase in balmy winter weather. But this trend – like increasing global average temperatures, sea level rise, and ocean acidification, to name a few – represents yet more evidence that we are altering our climate.

While you might be happy that your Ugg boots can stay in the wardrobe a bit longer, warm winter extremes can have adverse impacts too and - because they happen in the background - these impacts may not become obvious until the damage is already done.

The growing intensity and frequency of winter warm spells is helping to lengthen Australia’s bushfire season, by drying out fuel. This is particularly concerning when coupled with low rainfall and high fuel loads, similar to the conditions the prompted New South Wales to experience severe bushfires as early as October last year.

Agriculture suffers too. Staple crops like wheat are fine-tuned to an optimum climate, and extreme heat during the crop’s growth and reproduction phase significantly reduces its yield. All wheat needs is just one day above 35C during its spring flowering stage to do significant damage to grain size and quality. Bad grain can affect the quality of bread and (even more worryingly for some) beer.

This can reduce soil moisture, worsening droughts or even triggering new ones. Dry soils are also heavily linked to the intensity and frequency of summer heatwaves.

So while the unseasonal warmth may be pleasant, it is another link in the chain of climate change indicators. And the worst of the impacts are yet to come.