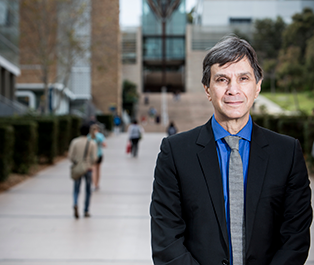 Dean Professor Alec Tzannes AM was recognised for his significant service to architecture, as a practitioner and educator, and through professional organisations.

Prof Alec Tzannes has been Dean of the Faculty of the Built Environment, University of New South Wales, since 2008, as well as visiting Professorial Fellow at Queensland University of Technology (2003). He has been National President of the Australian Institute of Architects (AIA) and has held several other executive positions with AIA at national and state levels over many years.

As Design Director of Tzannes Associates, notable projects include Federation Pavilion and Federation Place at Centennial Park, Overflow Park at Homebush, commercial buildings in Surry Hills, Woollahra and Double Bay, and numerous residential major works such as the Stonecutters (Sydney) and a residential precinct in the city of Newcastle (NSW). Tzannes Associates has received more than 40 major state and national awards, including Australia's top award for new residential work, the RAIA Robin Boyd Award and the RAIA Wilkinson Award.

Professor Tzannes has also been recognised previously, with a President's Medal from both the Royal Architectural Institute of Canada and American Institute of Architects.

For significant service to architecture and urban planning, particularly through the development of infrastructure in Sydney, and to professional associations.

For significant service to landscape architecture as an academic, particularly to the study of cultural, heritage and migration environments.

Bob Whittaker AM, National President of the AIB

For significant service to the building and construction industry as a leader and educator.

Congratulations to all who have been recognised.

See also the article in the BE News on our Australia Day honour recipients.