Can you surf the East Australian Current, Finding Nemo-style? 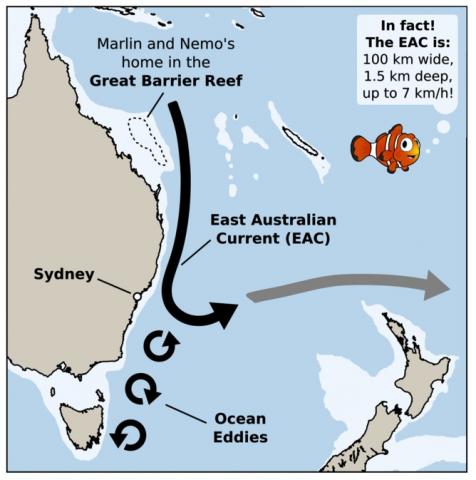 The animated movie Finding Nemo is responsible for most children’s (and parents') image of the East Australian Current.

And so Marlin, the father of little clownfish Nemo, rides on the back of a turtle as they hitch a ride on the East Australian Current all the way to Sydney.

But did Hollywood tell us the truth about what happens in our own backyard?

Well, the movie may have added just a little poetic license to the real ways of the ocean. The East Australian Current is not the fast-flowing warp-tube as it’s portrayed in the movie – it’s an even better ride than that.

The East Australian Current plays a crucial role in our east-coast climate and ecosystems. As it is World Oceans Day this weekend (June 8), it’s a good time to have a closer look at the big current in our own backyard and what it does for us.

Let’s start with what’s correct in the movie. The East Australian Current does flow along the East coast of Australia, obviously. And it does flow southward from the Great Barrier Reef. Speeds in the core of the EAC are among the strongest in the South Pacific, up to 7km an hour.

It transports a staggering 40 million cubic metres of water southward each second. That is the equivalent of 16,000 Olympic swimming pools flowing along our coastline, every second. The current is almost 100km wide, and more than 1.5km deep – in fact, more like a ribbon than a tube.

Why does the East Australian Current exist?

The wind systems over the ocean and the spin of the Earth cause water in both hemispheres to slowly flow toward the equator in what’s called the subtropical gyres (also where all our plastics ends up in the infamous garbage patches).

Obviously, the water that flows towards the equator has to go somewhere. It does so in strong currents trapped tightly against the eastern coasts of landmasses.

Our East Australian Current is part of a family of five. All subtropical ocean basins have one of these western boundary currents:

Each of these is set up by the same wind patterns. The theory that explains western boundary currents was developed by Norwegian oceanographer Harald Sverdrup and was one of the major accomplishments of physical oceanography in the 1940s.

Once the East Australian Current reaches New South Wales, the current breaks up into a train of giant, 100km-wide vortices.

These so-called eddies are giant droplets of warm tropical water, and they slowly move south while rotating anti-clockwise at 5 to 10km per hour. The amount of eddies passing along the NSW coast is so large that some have termed the region “Eddy Avenue”.

For many people, the eddies and strength of the East Australian Current become worth millions of dollars as the Sydney to Hobart yacht race kicks off on Boxing Day each year. If you’re on the wrong side of the eddy, the current is against you in your race south. Choosing the right path around the eddies is big business.

Apart from yachts, the EAC also transports marine species southward with tropical fish – including Marlin and Dory in their search to find Nemo – finding themselves in subtropical latitudes.

A change in the EAC

Climate change is already having an impact on the East Australian Current. The part south of Sydney has warmed up very fast, much faster than most of the rest of the ocean. And this warming is expected to continue in the future, with the current probably getting faster and stronger as well.

The warmer water being carried south to Tasmania already has an impact on marine life there. With warmer water, new species such as the spiny sea urchin arrive.

These new species, as well as the warmer water itself, slowly destroy Tasmania’s kelp forests, which support unique marine ecosystems, transforming them into rocky barrens.

One of the most iconic kelp species, Macrosystis pyrifera or “giant kelp”, forms underwater forests up to 30m tall and is rapidly disappearing along Tasmania’s shores.

Such large relocations of marine ecosystems can occur more often in a warming ocean. Species will be forced to move southward as their water temperature “at home” increases.

While this might be bad for all ecosystems, it is particularly dire for species now living in Tasmania. Unlike the tropical species in Queensland or the temperate species in New South Wales, which can move southwards (albeit not without problems), Tasmanian species have nowhere to go.

If they try to move southward they encounter the edge of the continental shelf. With the next piece of habitable shelf more than 3,000km to the south in Antarctica, that’s the end of the line.