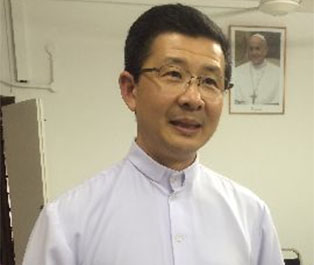 The Vatican named BE alumnus Reverend Father Julian Beng Kim Leow (BBuild 1989) as the Archbishop of Kuala Lumpur, taking over from Archbishop Emeritus Tan Sri Murphy Pakiam who stepped down on December 6, 2013 upon turning 75.
Apostolic Nuncio to Malaysia Archbishop Joseph S. Marino announced the appointment at the Archdiocesan Office in Bukit Nanas, Kuala Lumpur 3 July.
Leow will take on the title of Archbishop-elect until such time he is officially installed as the new Archbishop of Kuala Lumpur.
There are 40 parishes and chapels under the Archdiocese of Kuala Lumpur, which covers Kuala Lumpur, Selangor, Pahang, Terengganu and Negeri Sembilan.
The Seremban-born Leow has been a priest for 12 years. He attended St Paul's Institution for his elementary and secondary studies.  He later studied at UNSW from 1983 to 1988 and obtained his Bachelor of Building.  In 1994, he entered College General Major Seminary in Penang for his studies for formation to the priesthood and was ordained a priest on April 20, 2002.
Speaking to reporters later, Leow said that he had mixed feelings when he came to know that he was the one chosen for the post of Archbishop a few days ago.
"It was surreal for me, I was unsure what was happening," he said.
Leow added he was thankful to be inheriting a good structure from his predecessors and hoped to build on the foundation that had already been laid.
"Let us make Malaysia a wonderful place to live and work, a diversity of ethnic, culture and religion, and let this bind us as unity is our diversity," Leow added.
Story and image: Jennifer Gomez, The Malaysian Insider