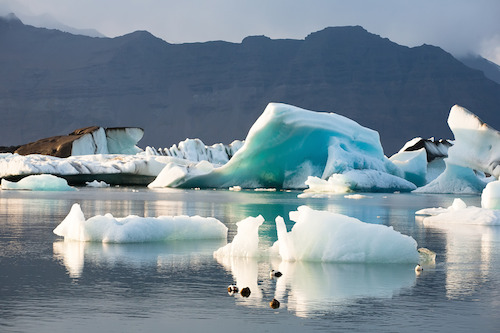 Changes to Antarctic winds have already been linked to southern Australia’s drying climate but now it appears they may also have a profound impact on warming ocean temperatures under the ice shelves along the coastline of West and East Antarctic.

“When we included projected Antarctic wind shifts in a detailed global ocean model, we found water up to 4°C warmer than current temperatures rose up to meet the base of the Antarctic ice shelves,” said lead author Dr Paul Spence from the CCRC at UNSW and the ARC Centre of Excellence for Climate System Science (ARCCSS).

“The sub-surface warming revealed in this research is on average twice as large as previously estimated with almost all of coastal Antarctica affected. This relatively warm water provides a huge reservoir of melt potential right near the grounding lines of ice shelves around Antarctica. It could lead to a massive increase in the rate of ice sheet melt, with direct consequences for global sea level rise.”

Prior to this research by Dr Spence and colleagues from Australian National University and the University of New South Wales, most sea level rise studies focused on the rate of ice shelf melting due to the general warming of the ocean over large areas.

Using super computers at Australia’s National Computational Infrastructure (NCI) Facility the researchers were able to examine the impacts of changing winds on currents down to 700m around the coastline in greater detail than ever before.

Previous global models did not adequately capture these currents and the structure of water temperatures at these depths. Unexpectedly, this more detailed approach suggests changes in Antarctic coastal winds due to climate change and their impact on coastal currents could be even more important on melting of the ice shelves than the broader warming of the ocean.

“When we first saw the results it was quite a shock. It was one of the few cases where I hoped the science was wrong,” Dr Spence said.

“But the processes at play are quite simple, and well-resolved by the ocean model, so this has important implications for climate and sea-level projections. What is particularly concerning is how easy it is for climate change to increase the water temperatures beside Antarctic ice sheets.”

The research may help to explain a number of sudden and unexplained increases in global sea levels that occurred in the geological past.

“It is very plausible that the mechanism revealed by this research will push parts of the West Antarctic Ice Sheet beyond a point of no return,” said Dr Axel Timmerman, Prof of Oceanography at University of Hawaii and an IPCC lead author who has seen the paper.

“This work suggests the Antarctic ice sheets may be less stable to future climate change than previously assumed.”

With both West and East Antarctica affected by the change in currents, in the future abrupt rises in sea level become more likely.

According to another of the paper’s authors, Dr Nicolas Jourdain from the CCRC, the mechanism that leads to rapid melting may be having an impact on the Western Antarctic right now. Dr Jourdain said it may help explain why the melt rate of some of the glaciers in that region are accelerating more than scientists expected.

“Our research indicates that as global warming continues, parts of East Antarctica will also be affected by these wind-induced changes in ocean currents and temperatures,” Dr Jourdain said.

“Dramatic rises in sea level are almost inevitable if we continue to emit greenhouse gases at the current rate.”

For more information, a copy of the paper or to arrange an interview contact:
ARCCSS Media Manager Alvin Stone. Ph: 0418 617 366. Email: alvin.stone@unsw.edu.au