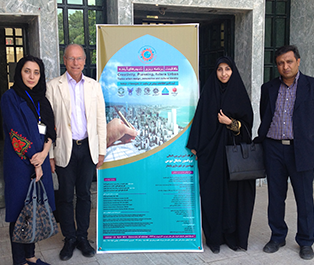 In April and May of this year, UNSW Built Environment Professor Michael Neuman was invited to spend three weeks in Iran to deliver lectures at four universities, as well as lead a three-day sustainable urban design workshop, the latter at the Shahid Beheshti University in Tehran.

The other cities in which Professor Neuman delivered lectures were Isfahan, Shiraz, and Mashhad. A total of 700 persons attended these lectures, including mayors, elected and government officials, practitioners, academic staff, researchers and students.

One lecture, titled 'Sustainable Processes, Sustainable Cities' was the opening keynote address at the National Conference on Searching for the Future City, in Tehran.

While Facebook is officially banned in Iran, the conference's page has drawn over 850 'likes'.  A number of articles featuring Professor Neuman were published in the local and professional media regarding these workshops and lectures.

Professor Neuman has been invited back to Iran to deliver more workshops and lectures, and seeks to conduct research regarding sustainable processes that were employed to build large cities in the desert hundreds of years ago, centring on sustainable green infrastructures such as rain gardens, stormwater management, wind catchers, and qanats, which are underground aqueducts.