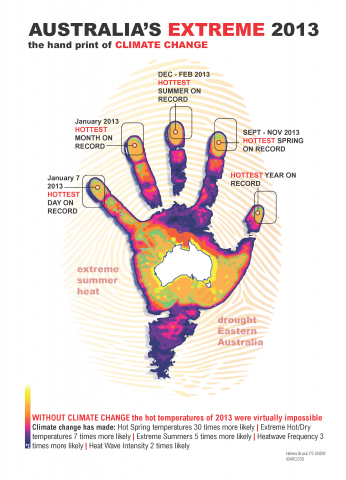 Australia's hottest year on record in 2013 along with the accompanying droughts, heat waves and record-breaking seasons of that year was virtually impossible without the influence of human-caused global warming.
New research from UNSW's Climate Change Research Centre, along with colleagues from among others the ARC Centre of Excellence for Climate System Science (ARCCSS), over five different Australian papers in a special edition of the Bulletin of the American Meteorological Society (BAMS), has highlighted the powerful influence of global warming on Australia's climate.

"We often talk about the fingerprint of human-caused climate change when we look at extreme weather patterns," said Prof David Karoly, an ARCCSS researcher with the University of Melbourne.

"This research across four different papers goes well beyond that. If we were climate detectives then Australia’s hottest year on record in 2013 wasn't just a smudged fingerprint at the scene of the crime, it was a clear and unequivocal handprint showing the impact of human caused global warming."

According to the research papers presented in BAMS, the impact of climate change significantly increased the chances of record heat events in 2013. Looking back over the observational record the researchers found global warming over Australia:

But perhaps most importantly, it showed the record hot year of 2013 across Australia was virtually impossible without the influence of human-caused global warming. At its most conservative, the science showed the heat of 2013 was made 2000 times more likely by global warming.

"When it comes to what helped cause our hottest year on record, human-caused climate change is no longer a prime suspect, it is the guilty party," said ARCCSS Australian National University researcher Dr Sophie Lewis.

"Too often we talk about climate change impacts as if they are far in the future. This research shows they are here, now.”

The extreme year of 2013 is just the latest peak in a trend over the observational record that has seen increasing bushfire days, the record-breaking warming of oceans around Australia, the movement of tropical species into temperate zones and the shifting of rain bearing storm tracks further south and away from some of our most important agricultural zones.

"The most striking aspect of the extreme heat of 2013 and its impacts is that this is only at the very beginning of the time when we are expected to experience the first impacts of human-caused climate change,” said Dr Sarah Perkins a researcher with the CCRC at the University of New South Wales and the ARCCSS.

"If we continue to put carbon into our atmosphere at the currently accelerating rate, years like 2013 will quickly be considered normal and the impacts of future extremes will be well beyond anything modern society has experienced."