Never too young to change the world

UNSW engineering student and leader of the Sunswift solar car racing team Hayden Smith will discuss the importance of 'taking the wheel' and being part of something bigger, at TEDxUltimo. 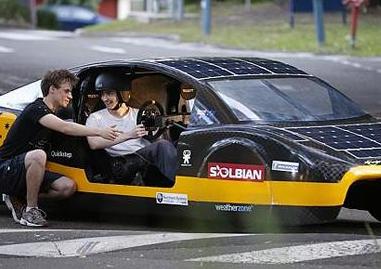 The theme of the event, based at the Powerhouse Museum, is 'The ultimate place to start something' and will feature eight speakers discussing their successful start-up stories and innovative ideas.

“It's about getting off cruise control, taking the wheel, and being part of something much bigger than yourself,” says Hayden, 21, who is in his third year of a combined Engineering and Science degree.

In July the Sunswift team made international headlines when they broke a 26 year old world-record for the fastest electric vehicle over a 500km distance.

“It's not often you can confidently say you made history before you even graduated,” Hayden says.

Hayden joined the Sunswift team at the beginning of 2013, and became Project Director this year. Sunswift’s current vehicle eVe is the fifth to be built and raced since the team was founded in 1996.

More than 100 undergraduate students contributed to Sunswift’s successful world record attempt over the past two years.

Hayden is keen to share the message that learning and growing isn't just about books and exams. “It's about friends, teams, and being part of something bigger,” he says.

For more information about TEDxUltimo and ways to watch the streamlined event go to Tedxultimo.com