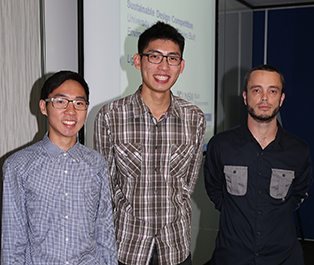 The five semi-finalists who presented their ideas were Andrew Best, Jonathan Yip, Kevin Si, Peter Choi and Shanny Goh, who presented at the NSW Transport headquarters in Chatswood last week. The students' projects involved a design solutiuon for the development of a light rail stop and a graduate school of architecture within the Anzac parade precinct.