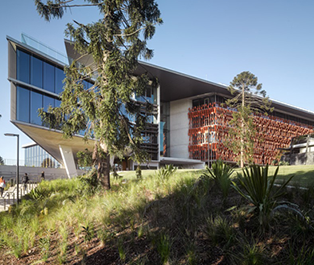 UNSW Built Environment Professors of Practice have once again performed exceptionally in the prestigious AIA National Architecture Awards this year.
The architectural practices of Professor Richard Johnson, Advisory Council member and Adjunct Professor Philip Cox and Professor Ken Maher received awards which were announced at the Darwin Convention Centre on November 6.
Professor of Practice Richard Johnson’s firm Johnson Pilton Walker (JPW) took out the Harry Seidler award for Commercial Architecture for the design of White Bay Cruise Terminal. The new Sydney cruise facility features a contemporary roof canopy draped on a historically significant gantry crane structure. The design involved the adaptive reuse of the sites existing port assets into a brand new cruise facility, transforming an ageing, unused site into a reinvigorated transport hub.
Johnson’s project fought off stiff competition which included 8 Chifley Square by Lippmann Partnership/Rogers Stirk Harbour & Partners (NSW), Bread in Common by spaceagency (WA) and the Prahran Hotel by Techne Architects (Vic).
UNSW Built Environment Advisory Council member and Adjunct Professor Philip Cox took out the National Enduring Architecture Award in collaboration with Ian McKay, for the design of Tocal Agricultural College. The college which is located in the Hunter-Region and opened in 1965 was celebrated by the jury for its simple material palette and remarkable building detail.
Professor Ken Maher, Chair of UNSW Built Environment Advisory Council and fellow with HASSALL, is celebrating HASSELL’s three awards for the UQ Advanced Engineering Building. The project is a result of a design collaboration between two practices - Richard Kirk Architect and HASSELL, and received the Sir Zelman Cowan award for Public Architecture, the Emil Sodersten Award for Interior Architecture, and the Sustainable Architecture Award.
The UQ Advanced Engineering Building, is a green living and learning building with real time monitoring of its structural and climatic performance. The awards jury, was greatly impressed by the project.
“The architects have taken an extremely complex program - including teaching spaces, a 500-seat auditorium, laboratories, research facilities and office spaces - and resolved a building that is not only exciting to inhabit, but also a delightful space to occupy.”
The jury said that “a sense of discovery pervades the building, with key spaces open to view and explained to assist the learning process”.
“As a public facility, this building excels. It has also been designed as a five Star Green Star building and therefore forms a new benchmark in sustainability in the subtropical region.”
The National Architecture Awards are one of the most prestigious in the design and construction industry, and have had a significant influence on trends in architectural design. Congratulations to our professors who have again received such well-deserved recognition for their outstanding industry projects.
View the full list of National Architecture Award winners.