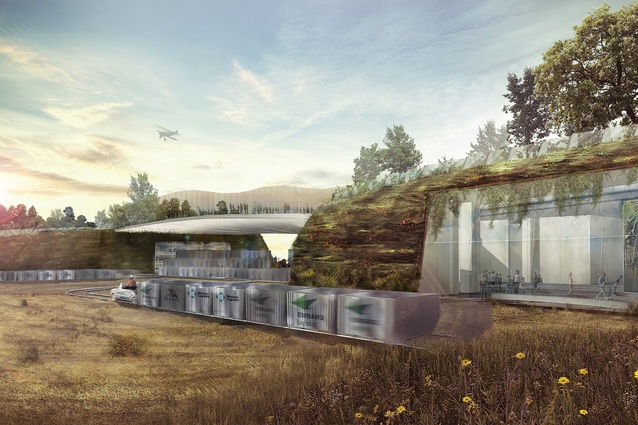 UNSW Built Environment Landscape Architecture Graduand Hassan Naddi, has been awarded the 2014 Landscape Architecture Student Prize offered by Landscape Architecture Australia and the Australian Institute of Landscape Architects.
Every student graduating from an AILA-accredited Australian landscape architecture program in 2014 was considered for the prize, and one winner from each of the schools was selected by their program during end-of-year presentations.
Hassan will graduate with Honours in June this year. Congratulations to Hassan on his outstanding work!
Image: Blurring the boundary between social, economic and ecological systems of a landscape by Hassan Naddi
Project statement
With the powerful and swift spread of urbanization, we are confronting a string of issues arising from non-receptive and static infrastructures, inevitably planned for obsolescence. This proposal for a second Sydney airport, located at Badgerys Creek, delivers a system of landscape gestures that operate in direct response to fluctuating ecological, social and economic conditions. By rethinking the use of energy in the airport landscape, this project exploits an untapped and usually shunned source of airport energy: noise. Noise is harnessed, transmitted and circulated while being converted to useable energy, and is also used to create new social spaces and experiences.
On a macro scale, the key gesture of earth building using volumes of excavated soil creates a perimeter mound system that abates airborne, traffic and heavy rail noise and stores airport utilities such as car parks. A modular conveyor system, conceived from the notion of future adaptability and minimizing footprint on the landscape, delivers modules, services and additional soil as needed around this dynamic self-adjusting perimeter. On the micro scale, sensory translations of sound manifest on the social level and verbalize the new conversation between the surrounding urbanization and the dynamic airport landscape.