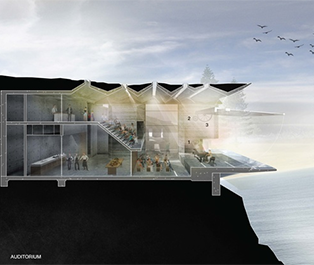 Alumnus Jin Chen Lee has been awarded the prestigious 2015 BlueScope Glenn Murcutt student prize for his project ‘Between Heaven and Earth: Avalon Surf Life Saving Club’ as part of the 2015 AAA Awards.
Jin Chen Lee’s project the Avalon Surf Lifesaving/Community Club which was exhibited in the Luminocity Leading Lights graduation exhibition in 2013, had 'aspirational qualities and clearly displayed a high level of design skill'.
The building appears to be carved out of the rock cliffs and the sand dune. Its shape is informed by the physical nature of the surrounding ancient geological formation, reflecting the driving, salt-laden onshore winds that have formed the nearby caves, the erosion that has exposed the stratification of the rock cliffs and the ravages of the Pacific Ocean. The project demonstrates a strong understanding of materials that are appropriate and available to the region.

Avalon Surf Lifesaving/Community Club by Jin Chen Lee
Jin Chen Lee’s project is a sophisticated exploration of light, prospect, refuge, atmosphere and the opportunity for the building to be a response to and extension of the landscape. View entry.
Barnaby Hartford-Davis, UNSW Built Environment alumnus and current student at RMIT has received the 2015 Student Prize for the Advancement of Architecture. The jury was most impressed with Hartford-Davis’s commitment to students through his involvement with SONA, playing a large part in advocacy and fostering relationships between students and professionals.
During his time studying at UNSW and RMIT, Hartford-Davis has held a number of student representative roles and national committee positions in which he has been a valuable asset to students and the architecture profession. Read more.
Congratulations to both Jin and Barnaby on their outstanding achievement.