A discussion on city governance – with bite 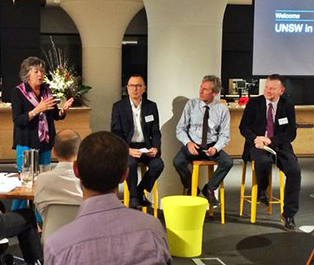 It was an encouraging sign to see newly installed NSW planning minister Rob Stokes at the first UNSW in the City roundtable on Wednesday night, with the minister admitting it was a challenging portfolio he had just stepped into.

Perhaps the advice of Australia’s top thinkers on urban governance could be just what the doctor ordered, especially given the trouble planning reform has landed this government in previously.

The topic of discussion: The Citizen’s City – devolution and localism. Pertinent considering the government’s previous rhetoric on planning reform was about handing back power to the community, rhetoric widely criticised as disingenuous.

Hosted by the Australian Graduate School of Urbanism and Cox Richardson Architects and Planners at Cox’s new CBD office space, the small invited audience of academics, architects, planners and public servants engaged in conversation on how to achieve better decision-making in cities, and whether the solution lies in more devolution of power to a regional or local level.

According to Cox director and chair Philip Graus, the roundtable format is ideal because “people learn more from a conversation than an argument”.

And so to the crux of the roundtable: who runs, and who should run, the city.

Speaking were Professor Mark Tewdwr-Jones, professor of town planning at the University of Newcastle in the UK and adjunct professor of urban planning and design at UNSW; principal of SGS Economics and Planning Marcus Spiller; and Luca Belgiorno-Nettis, founder of the newDemocracy Foundation.

A crisis of confidence

Tewdwr-Jones spoke to the audience about the UK’s experience with “localism”.

He told the gathering there was an appetite for public engagement and participation in metropolitan decision-making, with citizens wanting “a voice in the process of change beyond traditional democratic means”.

The traditional democratic fora were no longer seen as truly representative of society, he said, and this could be seen in voter turnout at the local municipal level in the UK, where cracking 30 per cent was rare.

The pressure for change was great, however, with growth of 10 per cent to be seen over the next 20 years. Issues of how best to accommodate population growth in the UK is, as it is here, extremely controversial, especially in terms of how the community is included in decision-making.

“There is a need to engage the public on the future of their places that they understand and they are happy with. And that puts question marks on the form of the planning system we have, which is very much about consultation on a plan, consultation on a development proposal.”

Dissatisfaction with a political system people think is no longer listening has led to “direct action” like protest movements against development.

“We no longer talk about NIMBY – not in my back yard – attitudes, but BANANA – build absolutely nothing anywhere near anyone.”

Localism as a response

The UK’s attempt to deal with rising community pressure has been “localism”.

The Localism Act introduced in 2011 aimed to devolve some central government decision-making powers to communities.

According to Tewdwr-Jones localism was a radical transformation, transferring powers away from the municipalities into the hands of citizens.

“It removes the powers of local governments and gives them to neighbourhoods and citizens. And it moves the power away from professionals in that process.”

He said it allowed 21 random people in any community to come forward and set up their own neighbourhood forum. The first 21 members of the public to come through were the ones who found themselves on the forum.

Tewdwr-Jones said the system had been successful mainly in rural areas.

“In urban areas it’s become more problematic,” he said. “Who really represents a multi-ethnic community of one part of a metropolitan area?”

Indeed, who has the right to speak on behalf of the community has been a fraught issue. Add in that another arm of the Coalition government has looked at localism sceptically, seeing the community as adopting the BANANA mentality – and localism therefore a potential block to development – and things get messier.

The solution for urban areas has been a new form of localism termed “muscular localism”.

“Namely if communities decide to reject development proposals in their back yard… they’re not allowed to,” Tewdwr-Jones said.

It has led to a community backlash from people expecting the promise of greater democracy, with the process becoming tainted because a development agenda had already been set.

Tewdwr-Jones said he had mixed feelings about localism. In metropolitan areas it did not work well. He said the promise of greater democracy with no ability to reject development had created false hope – raising expectations and them dashing them.

“I am more in favour of creating a citywide dialogue.”

He noted architect Terry Farrell’s idea of “urban rooms” for every metropolitan area as a possible way forward.

Metropolitan areas, he said, were being imperilled by outdated governance models.

“We can’t afford to have lagging or second-rate metropolitan areas. They drive the national economy.”

“It’s a sphere of government that is good at programs but not at places.”

Money was another key issue, with misaligned, unbalanced tax bases meaning cities could not deliver on their potential. He said Australia had arrived at a federation that had evolved into “a grotesquely top heavy edifice”, where the Commonwealth collects all but 15 per cent of all taxes.

The states are now behold to the Commonwealth on many core infrastructure decisions, he said.

“Sometimes you have to wonder if it is the Commonwealth rather than the states calling the shots on how our cities develop.” (Viewable in the federal government’s refusal to fund rail infrastructure, and a worry with the removal of the Major Cities Unit).

Spiller, however, said involving the Feds more in city development was the last thing we need.

“What we really need is for cities to take back their capacity to shape their own futures.”

Local government, he said, was always going to be locally focused and it was fanciful to believe it could take a regional perspective. As well, state governments could not stand for the metropolis – rather they represented the whole state.

“It follows to me that there is a geographic community of interest at the metropolitan level which [reveals as] a yawning gap in our democracy,” Spiller said.

Regional city-shaping infrastructure like WestConnex were things that metropolitan-level governance could better manage.

Spiller said there wasn’t an easy way out from having our cities sub-optimally managed. One suggestion he put forward was a metropolitan commission governed by four or five democratically mandated members appointed by electoral colleges of councils sitting alongside five or six state government appointees, so that the state government retained the balance of power.

After providing a brief history of Western democracy, Luca Belgiorno-Nettis advocated for local decision-making, as put forward by his newDemocracy model. Here randomly selected citizen juries are tasked with coming to a consensus on how to best solve a particular issue, with access to expert advice available.

Belgiorno-Nettis spoke of “the great intelligence” that comes when a group of people are given the opportunity to hear from expert practitioners before coming to a consensus.

For political acceptance, Belgiorno-Nettis said, “let the centre of the room be the community, and the community is best represented by a random selection.”

With localism, he said, there was potential, but the fact it was self-selecting was a big problem. His foundation would not recommend 21 people first in the door because the self-interested and the articulate would be the first ones in, and they weren’t necessarily representative.

Belgiorno-Nettis did not accept the notion that the community did not have the capacity to understand economic growth or complex drivers.

“You give the community – just like a criminal jury – the opportunity to deliberate on effectively life or death, and they make very sensible decisions.”

The room engaged in a discussion of the various suggestions put forward and how they would work in practice, especially with hot-button issues like increasing density in established areas.

Minister Stokes suggested a key concern with devolving power was setting appropriate boundaries, otherwise it could lead to “a completely unstructured discussion about things that can’t be delivered, and if they can’t be delivered that leads to real disillusionment in participating in the first place”.

“So we need [community] participation but we need to decide what we participate on. That’s one of the problems with localism, because you don’t get to say, ‘No we won’t have any change.’ You have to have change; you get to shape how it looks.”

Mr Stokes said he suspected regional planning had failed in the UK as it had in Australia because of a “democratic deficit” – no democratically elected representatives.

Getting a third level of regional planning without being top-heavy was another a key challenge, he said.

This discussion was the first in a series of UNSW in the City roundtables.