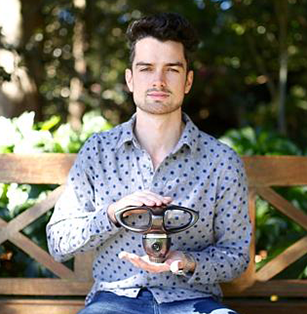 As published in in The Australian by Jennifer Foreshew
The narrow escape of relatives from the devastating Canberra bushfires of 2003 sparked Max Glanville’s creation of a new early bushfire detection system.
“Most of my family live in ­Canberra and my uncle’s place was very close to being destroyed so I remember it vividly,’’ Mr Glanville said. “I have always had it in the back of my mind.’’
The University of NSW bachelor of industrial design student’s Fire Front creation is a finalist in the Hills Young Australian Design Awards, with the winners to be announced later this month.
The 23-year-old believes Fire Front can help evacuate people 50 per cent faster as it can detect fires quicker than any other solution on the market.
The system, aimed at the residential market, detects a bushfire using a thermal imaging camera and ultrasonic wind sensors. The combination allows early detection of extreme heat and flames, while monitoring temperature, wind speed and direction.
The thermal imaging camera, in the bottom aluminium housing with silicone inlay, has a 170 degree-wide angle lens allowing for a large detection area.
The four ultrasonic wind transducers in the top aluminium housing allow wind to pass through while ultrasonic waves are bounced between the transducers to detect temperature and monitor wind speed and direction. This information is calculated and sent to all devices.
“It is that combination of the early detection with thermal ­imaging and that direction of where the fire is going to go and how fast it is going to come ­towards you,’’ Mr Glanville said.
The Fire Front prototype has a detector as well as a home module linking the home and an app for mobile connectivity.
“The home module acts as your kind of central location,’’ Mr Glanville said.
“Everyone in the house would know where to look for it if there was a fire happening and you can activate your survival plan.’’
Detectors would be mounted around a property and both hardware and software (applications) would allow residents to stay alert and prepared year round whether present or absent from their property. The combination of these devices allow vital continuous communication between residents and fire services both during and after an emergency.
The creation was Mr Glanville’s final major work and involved research with firefighters as well as residents affected in the 2013 Winmalee bushfires in the Blue Mountains.
“Until you actually talk to someone who has had that experience and knows exactly what it is like, that is when you get your really good insights into what can be done,’’ he said.
Mr Glanville was looking for funding for Fire Front to undertake testing and get the product on to the market within two years.
“This is something that I am quite passionate about and have been for a long time,’’ he said. “My dream would be to get this product funded and into homes.’’
The unit, home module and ­initial service fee would ideally be priced around $1500.
UNSW industrial design program director Stephen Ward said Fire Front could have a huge impact in bushfire prone areas.
“I think the thing that makes it unique is the interconnected ­co-operation between different services,’’ he said. “It is both an alarm system, but it is also linked with apps and communication systems.’’