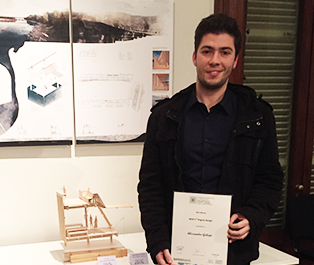 Three of our architecture students were recognised at the Australian Institute of Architecture (AIA) student design awards night on May 29.

Alexander Galego won the top prize, the AIA NSW first degree design award for his project Tidal, which was a result of the Glenn Murcutt studio.

Alexander says it’s an amazing feeling to be recognised at such a high level by the Institute.

“(This) was one of the most difficult sites and briefs I've ever had to design for, so it's a relief to know the endless sketches and models have paid off.”

The awards celebrate excellence in architectural education. Director of Architecture Professor Xing Ruan says this is a magnificent achievement.

“This is the third year in a row our students have won the AIA student design awards, including the AIA Design Medal in 2012 and 2013 academic years. This result from the 2014 academic year is to be celebrated.”

The work of the state's top architecture students and graduates was recognised at an exhibition of the NSW Graduate and Student Awards at the Institute's NSW Chapter during May.

​​​​​​​Tidal by Alexander Galego (pictured above)

This project seeks to organise a café, pools and amenities as a linear progression in the existing form of the bridge. With reference to the original axis of the bridge and the axis of the dunes’ contours, local basalt rocks from the existing ‘rip rap’ wall are re-purposed. They create seating interventions around a stage almost ‘found’ within the landscape. This project was led by Glenn Murcutt.