Landscape Architecture a finalist in the Canterbury Earthquake memorial competition 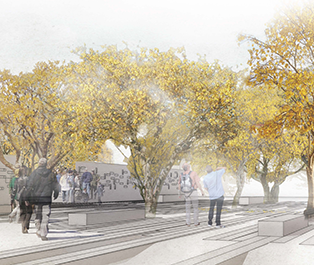 A team involving researchers from UNSW Built Environment was selected as one of six teams of finalists in the Canterbury Earthquake Memorial design competition run by the Canterbury Earthquake Reconstruction Authority for a memorial in the city of Christchurch, New Zealand.
The design competition called for a memorial to commemorate the 185 people who lost their lives in the devastating earthquake of February 2011, as well as those who were severely injured. The memorial was also to recall the huge impact that the series of earthquakes have had on the city and all of its inhabitants, and to acknowledge the role played by thousands of people who helped in the immediate crisis and in ongoing recovery of the city. The earthquakes began with a major earthquake in September 2010, which was followed by over 13000 aftershocks over an eighteen month period. Approximately 80% of the city’s CBD and thousands of homes have been demolished. Repair work is ongoing to many thousand more homes, and to major urban infrastructure. The memorial is intended as part of the ongoing recovery of the physical and social fabric of the city.
Of the 339 submissions were received, half were from New Zealand, and half from 37 countries around the world. On Wednesday 13 May 2015, Minister for Canterbury Earthquake Recovery, Hon Gerry Brownlee announced The Memorial Wall, designed by Slovenian architect Grega Vezjak, was the selected design for the Canterbury Earthquakes Memorial.
All of the design team have undertaken research on memorials and were able to use this to inform the design project. Dr Katrina Simon from the Landscape Architecture disicpline has researched the history and design of cemetery landscapes, particularly those in Christchurch and Paris, and has also run landscape design studios based on exploring the future possibilities of the radically changed city of Christchurch post-earthquake. She is also Co-Chair of the Faculty’s Design Research Cluster, which draws together researchers in the faculty who are also designers, in order to use the process of designing to create new knowledge and new possibilities for the future city.
Dr Russell Rodrigo is a designer and scholar whose work focuses on the architecture of memory and place, at the scale of both the private and the public. He completed a research-through-design PhD examining the spatialisation of memory and has designed a number of memorial projects including the NSW Police Memorial and the Gay and Lesbian Memorial in Sydney. His research has been published internationally through journals and conferences. Russell is currently a Senior Lecturer in Interior Architecture at UNSW Built Environment.
Kate Irwin Faulks completed her Bachelor of Architectural Studies and Honours at UNSW Built Environment. Her honours dissertation supervised by Dr Russell Rodrigo was a research-through-design investigation exploring how sensory experiences of the body and ritual acts of commemoration can be invoked in memorial architecture. Her thesis project proposed extensions to Sydney’s ANZAC Memorial and landscape aimed at providing meaningful and memorable places for people to experience. Kate is currently completing her final year of the Masters of Architecture degree at the University of Sydney.

Call and Response: A Sonic Field of Memory
The memorial is a field for gathering and remembering, and an instrument that embodies the acts of calling and responding, characteristic of the way that neighbours and communities responded, and continue to respond to the devastating effects of the Canterbury earthquakes.
The memorial consists of a long pedestrian bridge across the Avon and a datum of carefully orchestrated spaces, marked and defined by deeply engraved stone walls. The memorial is also a calibrated acoustic space, using the properties of concentrated sound reflection to create a series of echoes within and across the extent of the memorial space.
The idea of calling and responding has resonance with many cultural and musical traditions worldwide, including the ancient ritual of the powhiri, as visitors are welcomed onto a marae with karakia and an exchange of waiata, as well as being embedded in the choral rituals of the Anglican Church with two halves of the choir facing each other as they sing and answer one another.
The memorial creates an interpretive field where individuals and groups can gather and remember. It is also a place to call a lament to those who died and who can no longer call back to us. The memorial keeps this call alive as a literal and experiential reverberation.
The memorial is intentionally expanded across the river and across the site. It has a variety of connected spaces to allow for a range of experiences and responses to the memorial, and the very complex events that it recalls. The idea of call and response is embedded in the scheme in a range of conceptual and tangible ways, and at a range of scales that recall the immediate instinctive response of a neighbour to the coordinated international response of rescue services.
The memorial is seen as an anchorage point of a shared identity between peoples with the events of 2010 and 2011 seen as defining moments within a continuous history. The calibrated spaces of the memorial allow the potential for many cultural expressions, both physical and symbolic. The focus of the memorial is the space enclosed by the walls of names commemorating lives lost and the organisations that assisted in rescue and recovery. This space is designed for both intimate reflection and for formal ceremonial events.
The memorial is a field of interwoven natural and manmade elements. The sequence of walls will focus the visual and aural attributes of the site, framing the experience of the landscape, the shadows of trees, the coolness of the riverbank, the trickling of the stream, bird calls in the grove. Calibrated acoustic mirrors concentrate reflected sound to create echo points across the river, while sound installations within the transitional spaces intensify the peacefulness of the Kowhai Grove. Visitors will be drawn to explore the memorial spaces, to read the inscriptions, to touch the textured surfaces, to listen to the sounds and echoes.