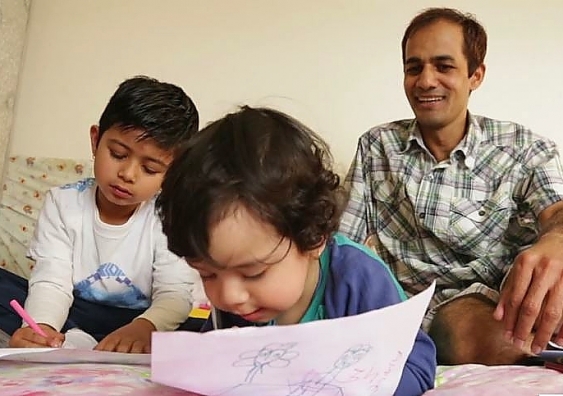 Tell Your Story is the first digital intervention of its kind to target self-stigma in refugees with varying levels of traumatic stress symptoms. The twelve-session online education program will feature video stories of refugee men who sought help for their post traumatic stress disorder (PTSD).

Participating men will watch stories in their first language, including Arabic, Farsi and Tamil. The stories will challenge common myths and support men to reach out for assistance and to also tell their own story.

In the introductory video about the program, refugee Narayan recalls the PTSD-related nightmares and flashbacks that saw him struggling to cope prior to seeking treatment.

“I encourage all my fellow refugees to tell your stories from your heart and mind so you can be free and lead a happy life,” said Narayan.

The initiative is a partnership between the Refugee Trauma and Recovery Program at UNSW's School of Psychology, Settlement Services International (SSI) and the Black Dog Institute.

UNSW clinical psychologist and Program Director, Dr Angela Nickerson, said the prevalence of PTSD in refugees is five times higher than the general population in Australia.

“Despite the damaging impact of PTSD, many refugee men do not seek psychological support,” said Dr Nickerson.

“The negative beliefs that many men hold about their own PTSD symptoms are a key barrier to accessing evidence-based interventions. We hope this program will help them overcome this barrier.”

The digital intervention will include interactive activities to educate users about PTSD and support them to develop personalised plans for seeking help.

“By overcoming the devastating effects of self-stigma, we can help refugee men to support each other and thrive here in Australia,” Dr Nickerson said.

Out of the Blue will create two web sites, one for men living with HIV and for same-sex attracted men in heterosexual relationships, to combat the stigma associated with depression and anxiety.

The initiative will be led by the Victorian AIDS Council in partnership with ACON, UNSW's Centre for Social Research in Health, Liquorice, GAMMA NSW and Living Positive Victoria.

The projects commence on 1 July and will be evaluated after two years.

Tell Your Story and Out of the Blue has each received $450,000 in funding, along with four other mental health projects, by beyondblue through donations from the Movember Foundation, to coincide with Men's Health Week this week.

The projects will use technology, such as apps and websites, along with evidence-based techniques to show men that taking action on mental illness is nothing to be ashamed of.