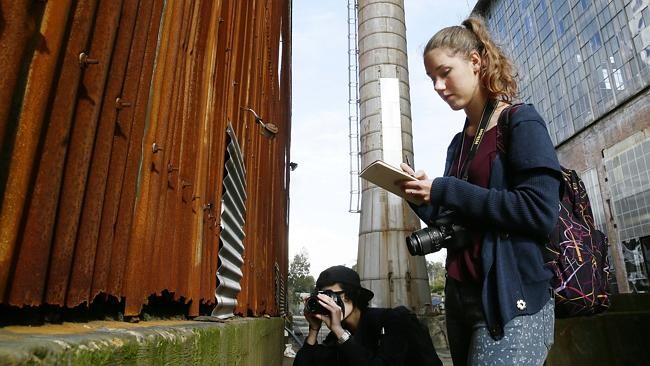 The Bays Precinct transformation is expected to take two or three decades, so today’s school and university students have been asked to submit their great ideas as the region’s future residents, visitors and workers.
Students from the University of NSW had a rare chance to explore the defunct White Bay Power Station in Balmain, one of developer UrbanGrowth NSW’s immediate priorities.

Steve Tadic, who has been the site manager for 20 years (since 1995) inside the control room. Picture: John Appleyard
They toured sites within the historic building, including the decommissioned control rooms from 1912 and 1955, and an abandoned recreation space resembling a dance hall with ’50s-era murals and a pool table.

Old play equipment in the workers recreation room .Urban renewal students from UNSW tour the inside of White Bay Power station with Urban Growth. Picture: John Appleyard
UNSW architecture student Elise Vanden Dool said she would love to see the power station, featured in The Great Gatsby and The Matrix, become a cultural hub for the precinct.
“It’s amazing how the building had been virtually untouched since it was decommissioned in 1983,” Ms Vanden Dool said.

Inside White Bay Power Station. Picture: John Appleyard
“While much of the interior was in a state of decay, with rusted metal, broken tiles and glass and flaking paint, it made it all the more fascinating.
“The historic character of the building needs to be retained and celebrated as much as possible, while making the site a usable space and one to reflect the innovation of the future.”

L to R: Students Elise van den Dool and Claudia Zoghbi take photos of White Bay Power station. Picture: John Appleyard
Transformation project leader Paul Hourigan said a vibrant new waterfront was exciting for Sydneysiders.
“It would be terrific if school kids and university students wanted to spend some of their holidays contributing to one of the most significant urban renewal projects in Sydney’s history by drawing and writing about their visions for the future of The Bays Precinct,” Mr Hourigan said.