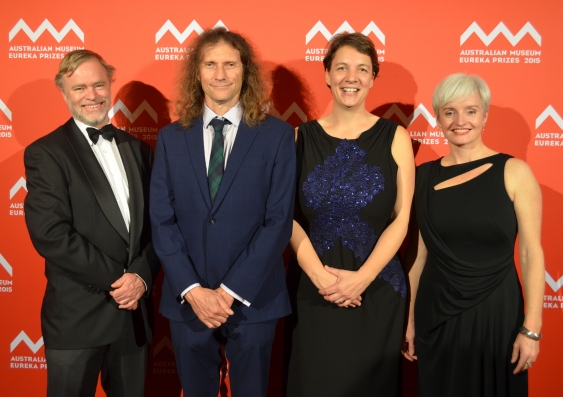 Knowledge is all around us – and knowledge is power, UNSW Dean of Science Merlin Crossley told the audience at the recent Australian Museum Eureka Prizes in Sydney. “All we need are the tools to harvest that power.”

And we don’t have to look far to find those tools. They are pure science and curiosity driven research – mechanisms “for harvesting  the power of knowledge from thin air,”  Professor Crossley said.

Australia’s best and brightest of these “harvesters” were feted at the prize-giving event – dubbed the Oscars of Science – at Sydney’s Town Hall in August.

More than 650 members of the scientific community were on hand to watch UNSW researchers walk away with three of the prestigious awards – for leadership, science communication, and environmental research.

Scientia Professor Michelle Simmons was awarded the CSIRO Eureka Prize for Leadership in Science for the energy, passion and commitment she has devoted to advancing the field of quantum computing in Australia.

As Director of the Australian Research Council Centre of Excellence for Quantum Computation and Communication Technology and head of a multidisciplinary, cross-institutional team of 180 researchers, Simmons has helped position Australia at the forefront of an international race to build a large-scale quantum computer based in silicon.

She told the audience she hoped to inspire those around her to achieve the best they could. She also thanked taxpayers for funding science. “Without them we wouldn’t be able to do this research. I hope that by doing something that is wonderful and inspiring we can actually make Australia proud,” she said.

Simmons has developed the world’s smallest transistor, built of one single atom, as well as the world’s narrowest conducting wires in silicon. She was named NSW Scientist of the Year in 2012 and was awarded an ARC Laureate Fellowship in 2013.

Last year, she joined the likes of Stephen Hawking and Albert Einstein as an elected member of the American Academy of Arts and Science. She was made the inaugural editor-in- chief of the first Nature Partner Journal based in Australia, npj Quantum Information, and also helped secure a $5 million investment in quantum computing from the Commonwealth Bank of Australia.

Executive Director and CEO of the Australian Museum, Kim McKay, congratulated Simmons and her team for “ensuring Australia’s success in what will become a multi-billion dollar industry”.

For her work educating the public about Australian marine science, Professor Emma Johnston was awarded the Department of Industry and Science Eureka Prize for Promoting Understanding of Australian Science Research.

She has used a variety of outreach approaches – from grass-roots community activities including the Run Off and Reach Out program on storm-water pollution, to regular appearances on TV and radio and in print – to ensure policy makers and the public understand the effects of their actions on the marine environment.

This included being a co-presenter on the successful BBC/Foxtel History series Coast Australia, where she helped take Australian marine science to an international audience.

In her acceptance speech Johnston, who is Director of the Sydney Harbour Research Program at the Sydney Institute of Marine Science, gave a heart-felt “salute” to her two fellow finalists – UNSW’s Associate Professor Darren Curnoe and CSIRO’s Dr Lisa Harvey-Smith. “It’s wonderful to have such great competition,” she said.

For their establishment of a universal standard for assessing ecosystem risks Professor David Keith and his IUCN Red List of Ecosystems team were awarded the NSW Office of Environment and Heritage Eureka Prize for Environmental Research.

Similar to the influential Red List for the world’s threatened species, it allows environmental threats to different ecosystems to be compared, making it easier to persuade politicians or the public of the need for policy change.

Congratulations also go to UNSW conjoint lecturer Dr Georgina Holloway, based at the Garvan Institute of Medical Research, and her Monash University colleagues, who won the University of New South Wales Eureka Prize for Scientific Research for their work on stem cells that could be used to cure a range of blood disorders and immune diseases.

Other UNSW finalists this year included Scientia Professor Martin Green and Dr Mark Keevers, from the School of Photovoltaic and Renewable Energy Engineering, who were shortlisted for the ANSTO Eureka Prize for Innovative Use of Technology for their work delivering the highest efficiency ever reported for converting sunlight into electricity; Associate Professor Kondo-François Aguey-Zinsou, from the School of Chemical Engineering, who was a finalist in the same category for developing the HY-Cycle, Australia’s first hydrogen-powered bicycle; Dr Rita Henderson, from the School of Chemical Engineering, who was a contender for the 3M Eureka Prize for Emerging Leader in Science for her world-class program of research, advocacy and outreach around water usage and conservation; and UNSW Canberra’s Associate Professor Charles Harb, who was a finalist in the Defence Science and Technology Group Eureka Prize for Outstanding Science in Safeguarding Australia category for his development of a cavity ring-down infra-red spectrometer that makes it possible to identify in real time a range of materials of security and defence interest, using only vapour.