Sunswift eVe, UNSW's two-seater sports coupé that holds the world record for the fastest electric car, is setting off to compete in the World Solar Challenge across the Australian outback. 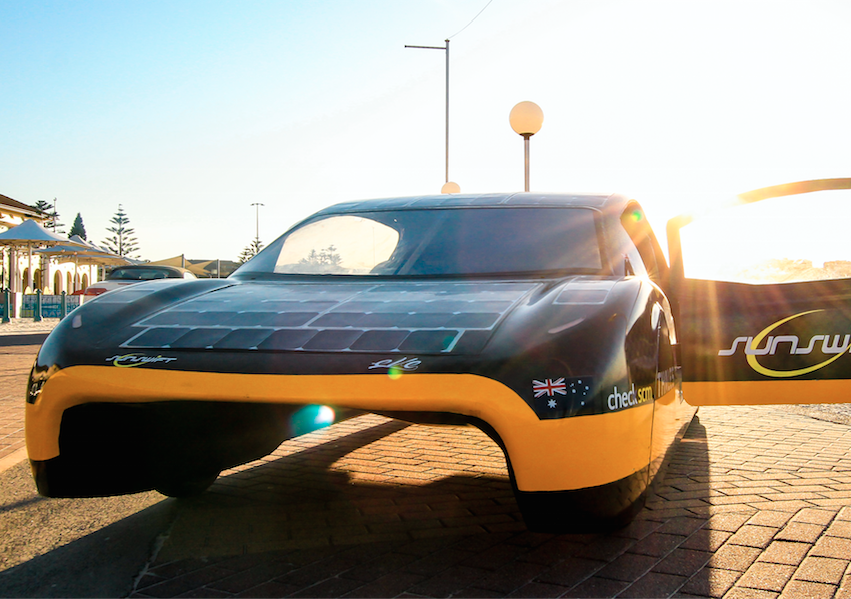 Sunswift eVe, the Australian two-seater sports coupé which currently holds the world record for the fastest electric car, will depart UNSW this Friday morning to compete in the World Solar Challenge across the Australian outback.

Built by the student-run UNSW Solar Racing Team Sunswift, made up of 34 engineering students, the car will be returning to compete in the gruelling 3,021 km race from Darwin to Adelaide, officially known as the Bridgestone World Solar Challenge. This year, 46 teams from around the globe will be competing from 18-25 October.

Sunswift eVe is competing in the Cruiser Class, the most technically challenging division, and in which the University of NSW team is the only Australian competitor. The black and yellow UNSW coupé will be battling it out against bigger and better-funded teams from Germany, the United States, Netherlands, United Kingdom, Japan and others.

In July 2014, Sunswift eVe broke the world land-speed record for an electric vehicle, travelling at an average 100 km/h over a distance of 500 km on a single charge. This knocked down a record that had stood for 26 years. The Fédération Internationale de l’Automobile recognised the achievement with a world record trophy.

This year is also the 20th anniversary of the Sunswift team, a student-managed and self-funded initiative run entirely by volunteers using technological solutions developed by its members. As well as breaking the world land-speed record last year, Sunswift eVe is undergoing modifications to become the first ‘road legal’ solar car in Australia.

A news conference with four members of the team, including one of its female drivers, will be held at UNSW’s new Michael Crouch Innovation Centre on the Kensington campus in Sydney.

The car will be on display outside the centre, and will do demonstration laps on campus roads before running through a gauntlet of supporters and a farewell balloon arch, before heading off to Darwin.

Speaking at the media conference will be: