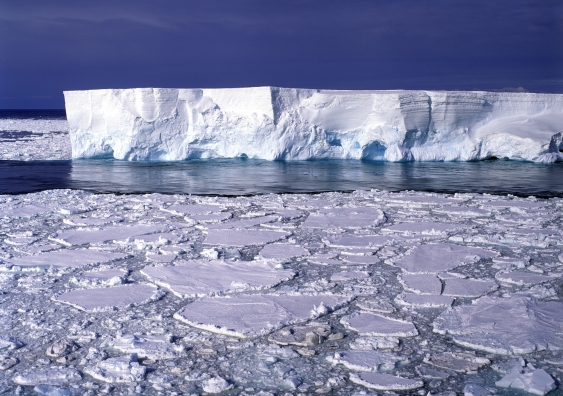 If global average temperatures rise 1.5°C-2°C higher than today, we will see the collapse of Antarctic ice shelves that will lead to hundreds and even thousands of years of sea level rise, according to new research in Nature.
The research highlights the moral significance of decisions made now about mitigating climate change.
The international team led by Dr Nicholas Golledge, from Victoria University’s Antarctic Research Centre, with Dr Chris Fogwill from the CCRC published ‘The multi-millennial Antarctic commitment to future sea-level rise’,  the study predicts how the Antarctic ice-sheet will respond to future atmospheric warming.
Using state-of-the-art computer modelling, Dr Golledge and his colleagues simulated the ice-sheet’s response to a warming climate under a range of greenhouse gas emission scenarios. They found in all but one scenario (that of significantly reduced emissions beyond 2020) led to the loss of large parts of the Antarctic ice-sheet, resulting in a substantial rise in global sea-level.
“The long reaction time of the Antarctic ice-sheet—which can take thousands of years to fully manifest its response to changes in environmental conditions—coupled with the fact that CO₂ lingers in the atmosphere for a very long time means that the warming we generate now will affect the ice-sheet in ways that will be incredibly hard to undo,” says Dr Golledge.
The 2013 Intergovernmental Panel on Climate Change (IPCC) report predicted that the Antarctic ice sheet would contribute only 5 centimetres to global sea-level rise by the end of this century even for its warmest emissions scenario.   But Professor Tim Naish, who worked with Golledge on the study and was also a lead IPCC author, said that when the report was written there was insufficient scientific knowledge about how the Antarctic ice sheet might respond to future warming. Those sea-level projections could have been too modest.
What makes the report particularly compelling is the way the results were reached.
“The striking thing about these findings is that we have taken the most conservative estimates possible,” said co-author of the paper, Dr Chris Fogwill from the Climate Change Research Centre at the University of New South Wales (Australia).
“In all IPCC global warming scenarios, only RCP2.6 saw Antarctic ice shelves avoid ongoing collapse. In every other case we saw significant collapse and rising sea levels continue for hundreds to thousands of years.
“The results suggest Antarctic ice shelf stability has a tipping point dependent on a critical temperature threshold that can lead to substantial sea level rise even if we reduce emissions after that threshold has been reached.”
The new findings therefore raise an ethical decision for us all.
Picture credits: iStock