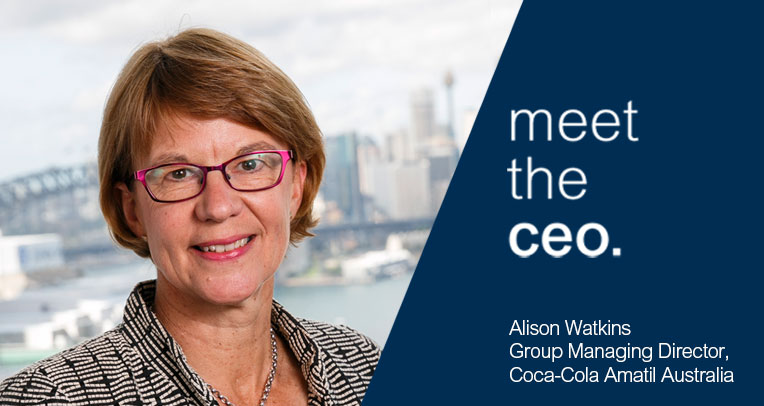 ​​Alison Watkins, Group Managing Director of​​​​​​​ Coca-Cola Amatil sits down with Mark Scott, ABC Managing Director, at UNSW Business School’s Meet the CEO event and shares her personal and professional insights on what it takes to lead Australia’s number one beverage brand and the path she took to the top.

From a farm girl in Tasmania to CEO of Coca-Cola Amatil (CCA), Alison Watkins made her way to the C-suite by building her career out and up. Her first corporate position was as a chartered accountant at Touche Ross. After reaching the limits of experience at Ross, Watkins left for McKinsey & Company. It was at McKinsey where the dreams of one-day becoming a CEO were planted. “My time at McKinsey was very formative,” Watkins noted. “It opened my eyes to a range of different businesses and industries; it helped me understand how CEOs and boards operate.”

Watkins recounted how the build-up of career experiences across sectors and functions provided her with the scope to lead a company that manages one of the world’s largest brands. “The shear breadth of situations that you are thrown into, having to get up the learning curve really fast,” Watkins said, provided her with a foundation she could continually draw upon as she moved onto new roles.

As Watkins moved around she made sure each position offered her a new area of knowledge she could develop. “The move to Berri came about because I wanted to run a smaller organization where you had the end to end responsibility.”

But it wasn’t just about experience. One of the biggest lessons Watkins learned was the “importance of working with good people, people you can respect and people you can learn from.” Watkins noted that if you “create a relationship that is productive” you can do anything.

As head of CCA, Watkins has made a point of doing just that. “Corporates tend to be intrinsically more hierarchical and hierarchy can stifle creativity, initiative and ideas,” she said. To counter this, under Watkin’s leadership CCA has developed a culture of openness and accessibility by creating an environment of trust across leadership.

One of her most important takeaways from McKinsey was the importance of values.

“One of our values was the obligation to dissent which meant if you joined yesterday and were sitting next to a director who had been there for twenty years and you were having a discussion and didn’t agree, you had an obligation to speak up and not just be quiet,” Watkins explained.

And it’s that culture of communication that has led CCA to success in the Australian marketplace while working under the guidance of a parent company. CAA’s strong relationship with Coca-Cola has allowed the company to work with the power of a global brand but at the local level.

“We work very collaboratively [with Coca-Cola]. Things like the ‘Share a Coke’ campaign originated in Australia. It was developed by us with our partners here and its now in 90 markets around the world.”

While Watkins did recognize the challenges of managing the Coca-Cola brand, especially as consumer tastes change, she also noted that support from Atlanta was allowing them to meet those challenges and develop new products. “They are very receptive to ideas and things that make sense for local markets,” she said.

And for Watkins that’s a winning strategy. “I think it’s a wonderful combination and at its best it’s unbeatable.” ​​