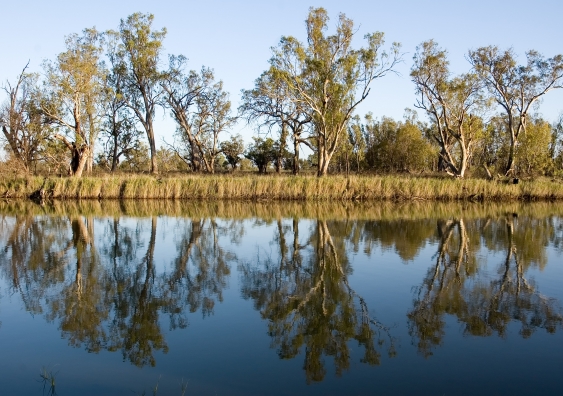 Satellite observations reveal plants in Australia’s semi-arid and subhumid regions are getting greener because of increased atmospheric CO2, but at a significant cost to water resources.

The growing vegetation is consuming more water, so less runoff now flows into many of Australia’s river basins, according to new research published in Nature Climate Change.

This has implications for water resources in several populated and agriculturally important regions.

The study used a new method combining satellite measurements of vegetation cover with river flow observations for the last 30 years. Using statistical methods, other influences affecting river flows, such as variations in rainfall, were factored out.

CO2 concentrations have risen by 14% since the early 1980s. The scientists estimate this led to a 24-28% reduction in streamflow in subhumid and semiarid river basins due to CO2-induced greening.

“This means local water resources in many water-stressed regions of Australia are under increasing pressure”, said lead author Dr Anna Ukkola, who performed the research at the Department of Biological Sciences at Macquarie University, but is now based at the ARC Centre of Excellence for Climate System Sciences.

“To compound matters, many of these regions are projected to experience future declines in rainfall as a result of climate change”.

The good news is that plants were able to use water more efficiently at elevated CO2. The research showed that, as a result, vegetation is now able to grow more vigorously in water-limited regions. In areas with an average annual rainfall below about 700 mm, it was estimated that the amount of vegetation cover that can be sustained has increased by about 35% since the early 1980s. This has positive implications for dryland cropping and grazing which are likely to enjoy increased yields as a consequence.

The greening vegetation is also likely taking up more carbon from the atmosphere. But this effect will not be strong enough to significantly slow the rise in atmospheric CO2 concentrations and the resulting long-term climate change.

Despite the observed greening, Australian ecosystems continue to be very sensitive to variations in rainfall. Understanding the combined effects of climate and CO2 on vegetation and water resources thus remains critical.

“The role of vegetation makes predicting future water resources difficult at best,” said co-author of the study, Dr Trevor Keenan from the Department of Biological Sciences at Macquarie University.

“We are however getting a better picture of likely possible futures for vegetation, water resources, and the impact of climate change on society in Australia.”