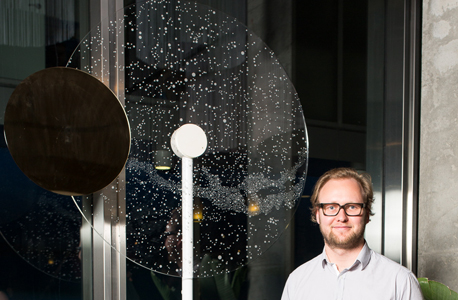 This was originally published on the Australian Design Review (ADR) website www.australiandesignreview.com

We catch up with inaugural AFDA winner Seaton McKeon during his visit to Melbourne, after his first meeting with Tony Russell, brand director at Stylecraft, to discuss their upcoming collaboration.

Inaugural Australian Furniture Design Award winner, Seaton McKeon is riding a wave of success, with his acclaimed light, entitled ‘The Sun, The Moon and Me’ currently touring Stylecraft’s Sydney, Melbourne, Brisbane, Canberra and Perth showrooms. Having studied industrial design at the University of New South Wales, the talented and deeply considered McKeon has previously exhibited at Workshopped, and has a broad range of experience including way finding, transportation, and urban design.

We catch up with Seaton during his visit to Melbourne, after his first meeting with Tony Russell, brand director at Stylecraft, to discuss their upcoming collaboration.

adr: So what’s it been like for you since you won, Seaton?

Seaton: Initially the process of prototyping was really tight and there was a lot of having to get the product up to scratch, working to redesign parts, but I guess there’s been a bit of a lull over the last month where I’ve had a bit of time to think. So it’s been fairly relaxed to be honest, there hasn’t been any sort of horrible pressure.

Tony:  Over the past couple of weeks we’ve been able to get timelines in place. I met with Jon (Goulder) from Jam Factory a couple weeks ago and have just met with Seaton today, with a view to deciding what path we all want to go down before Christmas. The plan is to be launching the product in line for when the next round of entries are called, around this time next year.

The awards happen every two years. Those two years are really where we get the time to be considered in our response.

ADR: So do you have a sense of what we can expect from the collection? Will we be able to have The Sun The Moon and Me in our homes?

Tony: Well, the light is a separate entity – it wasn’t necessarily that the winning product would be sold at Stylecraft, it was more that it would provide the opportunity for the winner to work with Stylecraft and JamFactory to develop a new collection.

Seaton: It’s a blank sheet, I guess – opening a dialogue between what Stylecraft actually wants and a meaningful design outcome, rather than just taking a stab in the dark and slotting it in the range to see whether it takes off, whether there’s any need for it or not. AFDA is an interesting competition because it’s not about the particular product in terms of its commercial viability, it’s about design in general, across the entire landscape of design. What it means to me to be successful is to be able to design something that has meaning beyond the commercial outcome at that point in time, to try and contribute something to the history of local Australian design that wasn’t compromised or as niche and specific as just another chair would be. I think that’s what makes AFDA a unique offer.

A lot of the time, younger designers are designing products that are already out there or reinterpreting manufacturing to try and have another ‘me too’ product in the market. So I think what this award lets you do is say ‘What really needs to be designed?’ Or what do you actually need to say as a designer, what do you want to say? So I think it’s a platform for the design to have more meaning or more depth than just a product – it allows you to say what you want to say and then work on something else after that.

ADR: Is that part of the reason why Seaton’s designs stood out for you Tony, being on the judging panel for AFDA?

Tony: Well it was interesting. One of the main criteria for winning the award was that it would be acquired by the Art Gallery of South Australia. They’ve got the original prototype of the Marc Newson Lockheed Lounge on display, so the piece had to be something that could stand alone within the gallery space. So looking through the entries it was firstly about whether the piece fulfilled that gallery criteria, and then, given that the entrants had to submit a background of previous work, it became a question of whether their work would align with the Stylecraft brand. If that is the winner, can their design aesthetic translate into what Stylecraft is about? That was my personal angle, but I think also that when Seaton gave his presentation on the shortlist day, everyone was quite captured by the thought process behind the design.

Seaton: It had been a long time in the making, I guess. So for the next awards, I think I’d encourage people to go beyond what they would normally design, to go beyond another product or a standard offer and try and make a statement with what they design, because I think it’s important that that happens and I think it’s one of the only opportunities to do that. I mean, you might spend all your money on making a prototype, but if you win, you can pay for it!

ADR: At least you can break even?

Seaton: Haha. Well, you more than break even. It encourages that higher level design thinking, that higher level of contribution – whatever that means to whoever the designer is, whether there’s a right or wrong.

ADR: It would seem that ‘The Sun, The Moon and Me’ is a bit of a departure from your previous product design work, in terms of being strongly conceptual rather than explicitly functional.

Seaton: I guess so… it probably is, like I said it is that opportunity to do the thing that you think conceptually about. And given the context of the art gallery setting, that’s what really made me go for it. Because you always have conceptual ideas that get distilled as a product designer, through manufacturing and production techniques, and I really enjoy that, so they inform a lot of what I do. But I guess that the context for this was not a client or a thing, and that opened up that possibility.

Tony: I think even from a concept point of view, when we were going through the initial meeting to come up with the shortlist, we were like, ‘Is it a light? Is it a mirror?’ But I think what Seaton says about the competition being conceptual meaning you can really go for it is important. This being the first year of the awards, this sets the parameters for future awards. How we work with the inaugural winner on the first collection is key, and it’s important to us that by the time the next round of entries are called for in just over 12 months’ time, we can show them what the result of winning is.

ADR: Is having these design competitions what drives younger product designers to get their names out there?

Seaton: I think it’s having a deadline, a lot of the time. To be honest, the majority of other competitions haven’t been more than the exhibition or the presentation; there’s been a real lack of follow through. There’s merit in doing them if you want to expand on what you’ve done and explore things. I think in industrial design as compared with architecture where you might be tendering on a public building, architecture seems quite open, more encouraging of publicity or public engagement – whereas in product design it’s much more closed doors, much more about IP protection, about having the methodology and ability to follow through on a project. And because product designers are not as open to say ‘here’s our breakthrough technology, here’s what it looks like as a product’, competitions give you a stage to explore those ideas and share them a little. Nonetheless it’s very competitive, and there is a lot of free work done.

Tony: I don’t think I’ve ever asked you Seaton, why did you enter the award? Was it to bring The Sun, The Moon and Me to life? Or was it to work with Stylecraft? Or to win the money? Was there any one motivating factor?

ADR: Surely it was to work with you, Tony?

Seaton: Yes, it was all about Tony! Haha. A triple barrelled shotgun. It was all of the above, I guess. I’d been thinking about making that product for some time, it was this thing in the background ticking away. But you think, ‘why on earth am I going to go and spend all my money prototyping and developing an idea when it’s so much easier to not?’ So when the competition came around I thought I’d just cross my fingers and go for it. I also really admire Stylecraft as a brand and I thought, you know, there’s all these things I’m thinking about as a designer, and things I’d like to collaborate with them on – so yes, working with them was a great motivator. The personal satisfaction of having made the product and being able to share it and now work together is something that keeps you going through all of the obstacles of making it.

That’s what’s great about AFDA as well is that you have to physically make something – it’s one thing to be conceptual and do a render, but there’s a lot of learning by doing that is hard and upsetting and necessary to get it out the other end. Once you have it in front of you, you can see what works and what doesn’t. I literally put a mirror on there after realising, “Gee, that’s useless in the day!”

ADR: It looks just as great in the day. Will you display it in the dark?

Seaton: Yeah in the dark, I want to present it in its best light. It’s all about the stars. The concept came from a personal experience when I’d just come home from Europe – my parents live about an hour and a half out of Sydney, and I got off the train quite late after this whirlwind of a trip, feeling like I’d been turned inside out. Then suddenly I was home and looking up at the clearest night sky, feeling like I’d melted away a bit, as if those barriers you have in the city blur, in that experience of winding down at the end of a day. So hopefully we can communicate that sense.

Seaton McKeon’s collaboration with Stylecraft and JamFactory is set to launch in November 2016. ADR will continue to track Seaton’s progress, mapping the design process as the collection takes shape ­– watch this space!