The UNSW Business School is to host BusinessThink | Indonesia, a landmark panel in Jakarta. ​​​​ 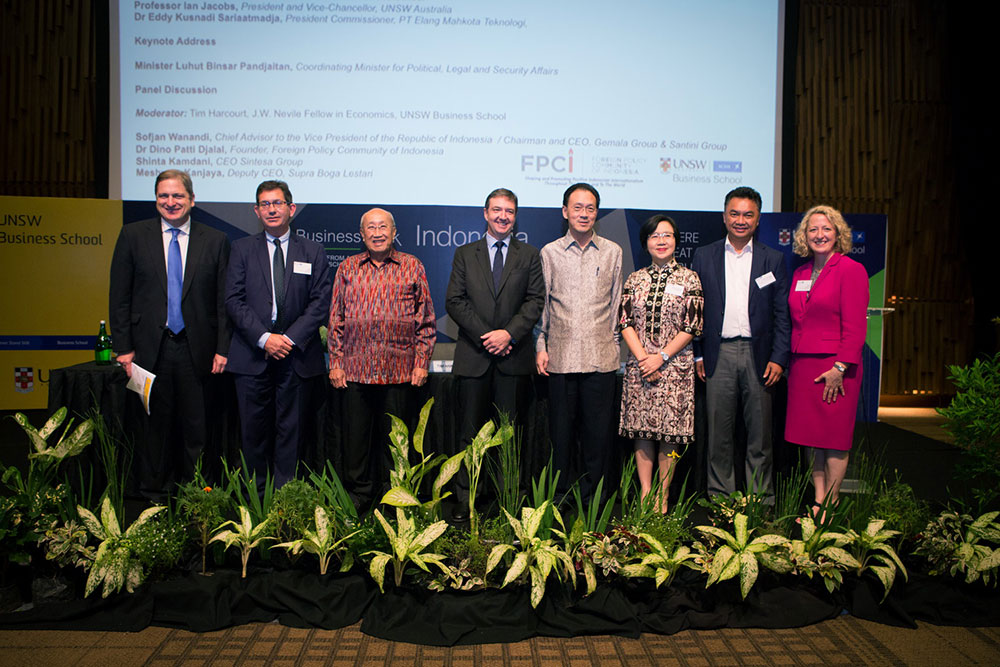 UNSW Business School has held its first international BusinessThink event in Jakarta, attended by the President and Vice Chancellor of UNSW, Professor Ian Jacobs and the Dean of the Business School, Professor Chris Styles. It is part of a series of events to strengthen two way engagement with Asia.

BusinessThink | Indonesia brought together Indonesia's top entrepreneurial leaders to share exclusive insights into the current and future state of business in Indonesia, with the theme ‘Pro Business: Perspectives from Indonesian Government and Business Leaders’.

Welcoming panellists to the event, Professor Chris Styles said “Indonesia will continue to be an important focus for UNSW Business School in 2015 and beyond. It is our third largest recruitment market. We intend to build deep and effective relationships with new students, alumni, business and research partners in the region.”

“As demand for cross cultural fluency from Australian companies grows, so does our focus on equipping our students with the skills and cultural nuances needed to conduct business in Indonesia,” he said. “Interest in Australia-Indonesia business relationships is escalating rapidly, and we are proud to be committing to stronger two way engagement at this time.”

The keynote address was delivered by Minister Luhut Binsar Pandjaitan, Coordinating Minister for Political, Legal, and Security Affairs of the Republic of Indonesia, exploring the concept of 'Pro-Business' in Indonesia. He founded Toba Sejahtra Group, a fast-growing group focused on natural resources, electricity generation and agriculture.

He said “Indonesia is seeing more than acceptable economic growth at the moment, and I am optimistic that it will continue to increase in the future. The business climate is also expected to be more conducive to business, thanks to a number of pro-business policy improvements.”

He discussed how deregulation can give a major boost to the economy in Indonesia, and added that he wanted to see much more development of infrastructure.

“We are building many roads, a new high speed rail line on the island of Java, and a large metro system for Jakarta, funded by reducing the fuel subsidy. However more needs to be done,” he said.

The event will be hosted at the SCTV studios by UNSW alumnus, Bapak Eddy Kusnadi Sariaatmadja, President Commissioner of Emtek Group, who welcomed guests to Jakarta and to the SCTV Tower.

The panel event was moderated by Tim Harcourt, the J.W. Nevile Fellow in Economics at UNSW Business School, who stimulated discussion around business, innovation, and entrepreneurship in Indonesia. He encouraged the panel to discuss how the economy could be stimulated, and the wider integration of women into the workforce.

He said Indonesia is developing a flourishing democracy and economy, and described the country as a vital trade partner for Australia. “On the business side of things Indonesia and Australia are long-standing economic partners.”

He added that it was symbolic that the new Australian Prime Minister, Malcolm Turnbull, like one of his predecessors Paul Keating, visited Indonesia first when he was elected.

“There is strong evidence of Australia supporting Indonesia as an economic partner and vice versa,” he said. “After all, Indonesia was probably the Australian continent’s first trading partner. Then in the 1940s, in the early era of Indonesian independence, Australia was there working together with the country on trade, investment and education ties.”

When the panel event started, initially all four members agreed with Minister Luhut on infrastructure. They argued that the economy was being held back somewhat by road congestion and a lack of public transport.

Sofjan Wanandi, Chief Advisor to the Vice President of the Republic of Indonesia, and Chairman and CEO, Gemala Group & Santini Group, spoke up in terms of investment in infrastructure. “We need more of it. More ways to get goods to market,” he said. “Investment is vital in this area if we want to seize potential opportunities.”

Meshvara Kanjaya, Deputy CEO, Supra Boga Lestari agreed with him, and said that building more infrastructure, like roads and railways, would help producers and ecommerce.

She added that with Indonesia’s young population, “many young people are on the net, and all of them like to shop. The real surprise of the past few years has been middle income growth. It’s been huge in Indonesia.”

Dr. Dino Patti Djalal, the founder of the Foreign Policy Community of Indonesia, started his remarks by stating that now is a great time to be Indonesian. “The middle class is the largest in Asia, and it is noticeable that the country has a ‘can do’ attitude. However Indonesia needs to reduce income inequalities and move forward from commodity to industrial base.”

He went on to say that entrepreneurship and innovation in Indonesia is about building a bridging eco-system between the government and private sector. However he cautioned that “the eco system is currently weak in Indonesia, and something the country needed to work on.”

He added that Indonesia is great at finding new opportunities and building on them. Indeed, he added in the Q&A at the end of the event, that there are some parallels with the country and it’s near neighbours. “I’m sure that if we want to see where Indonesia will be at in 20 years, we should study China.”

He said that China, as an economic competitor in Asia, could be regarded as “a challenge but not a threat”.

Shinta Kamdani, the CEO of Sintesa Group, which has interests from power stations to property, said that Indonesia widely welcomed women into the workforce, and indeed there were on average more women in companies than in comparable firms in Asia.

“However, we must recognise that being a female entrepreneur is hard wherever you are,” she added. “Finance is a significant barrier to increasing female entrepreneurship in Indonesia. However we can give women a boost and mentoring is vital to get further female integration into firms. Women can learn much from their counterparts in business.”

The event was attended by the Australian Ambassador to Indonesia, His Excellency Paul Grigson.

With a full house, the audience of alumni, business leaders, entrepreneurs and Government guests experienced the full breadth of insights around 'Pro-Business' in Indonesia.