A group of students has returned home from Harvard University’s prestigious BIOMOD championships, where they were placed in the Gold category for their innovative vaccine research . 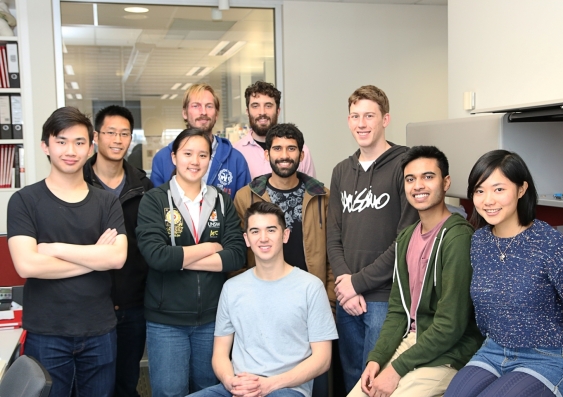 A group of students has returned home from Harvard University’s prestigious BIOMOD championships, where they were placed in the Gold category for their research to rebuild bacteria to use in vaccines against some of the world’s most prevalent diseases.

The international biomolecular design competition saw 30 student teams from around the globe use the ‘molecules of life’ to build everything from autonomous robots, molecular computers and prototypes for nanoscale therapeutics.

Team Injectimod, a group of UNSW engineering, medical and science students based at the Victor Chang Cardiac Institute, represented Australia at the championships.

The students spent four months in the lead up to the competition working to artificially construct the ‘tip’ of bacteria’s molecular syringe, the ‘Type III Secretion System’ (T3SS). The T3SS injects proteins into cells to help bacteria evade the immune system and cause infections resulting in conditions such as diarrhoea and typhoid fever.

As the tip one of the only parts of the molecular syringe exposed to our immune system. it is an attractive target for the development of new vaccines against bacterial infections. Artificially building the tip is an innovative approach to vaccine design which may prove to be an effective way to achieve new antibacterial vaccines.

UNSW student Siddharth Doshi said the project pushed the team to its limits and helped reinforce the importance of rigour in science and research.

“We managed to rebuild part of the needle tip on a tiny scaffold made from DNA and also determined the structures of the needle tip proteins in solution, which has never been done before. We believe our results will lead to important scientific publications,” said Doshi.

“We will also continue to take this research forward with team member Stephanie Xu’s honours project next year focused on how the proteins of the tip interact with each other to form a complex structure.”

Two team members, Andrew Tuckwell and Jon Berengut, who mentored the students, went into this year’s competition looking to defend their title. They were part of the Victor Chang team that took out the competition’s Grand Prize in 2014 for their DNA nano-machine designed to detect viruses such as Ebola.

Despite an impressive showing, the UNSW/Victor Chang team were beaten to 1st place by Team Sendai from Tohoku University with 2nd place going to NanocANDy – Ludwig-Maximilians-Universität München and 3rd to HUST-China - Huazhong University of Science and Technology.

“They worked together at a capacity far beyond their level of study and produced a number of potentially important results in a very short amount of time."