In recognition of having a distinguished research career in Economics, Professor Erwin Diewert has been elected as a Fellow of the Academy of the Social Sciences in Australia. 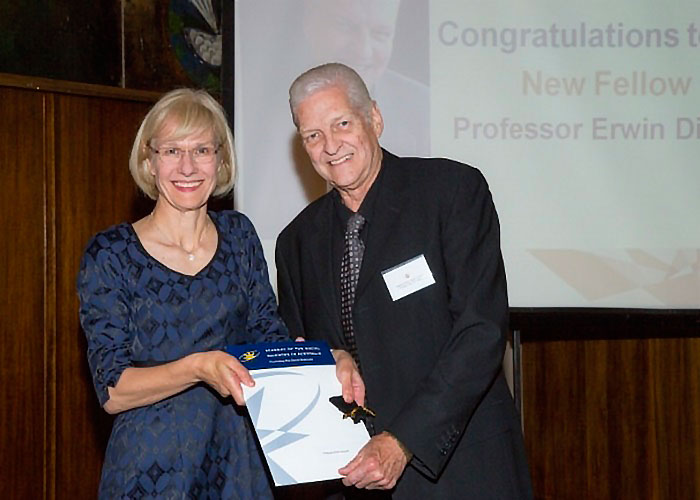 In recognition of having a distinguished research career in Economics, Professor Erwin Diewert has been elected as a Fellow of the Academy of the Social Sciences in Australia. He received his testamur at Academy’s annual dinner in Canberra on the 17th of November.

The citation for Professor Diewert’s election as a Fellow reads as follows:

Professor Erwin Diewert is the only economist in Australia (and Canada) who is a Distinguished Fellow of the American Economic Association, one of the highest honours in economics. He has made outstanding contributions in the theory and practice of economics, introducing the concepts of flexible functional forms and superlative index numbers, as well as being a pioneer in duality theory, revealed preference theory, international comparisons and the user cost approach to capital measurement. Many of these contributions have been fundamental, generating new literatures and having an impact on real world practice.

His work on index numbers resulted in the U.S. changing the way they calculate GDP, probably the most watched statistic in the world. Besides his prolific publication record in leading academic journals, he has been a major contributor to a series of manuals that guide national and international statistical agency practice, such as the ILO manual on the Consumer Price Index, the IMF manual on the Producer Price index, and the EuroStat Handbook on Residential Property Price Indices.

With agencies such as the OECD, U.S. Bureau of Economic Analysis, the Australian Bureau of Statistics and Productivity Commission, he has worked to improve methodology and research agendas. It is extremely rare that an academic economist of his stature engages so closely with relevant agencies to improve the information that is used in policy making.

For his outstanding contributions to theory and improvements in data key to effective policy making, he fully deserves the recognition of being a Fellow of the Academy.