Australian engineers have proven – with the highest score ever obtained – that a quantum version of computer code can be written and manipulated using two quantum bits in a silicon microchip, removing any doubt silicon can be the foundation for a powerful quantum computer. 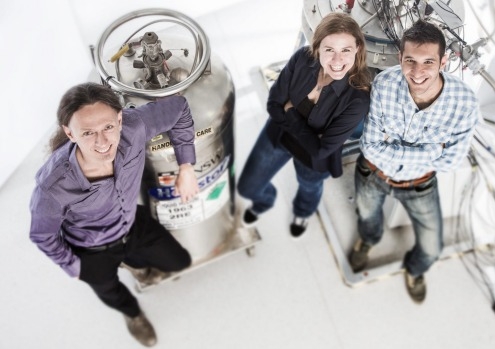 A team of Australian engineers has proven – with the highest score ever obtained – that a quantum version of computer code can be written and manipulated using two quantum bits in a silicon microchip. The advance removes lingering doubts that such operations can be made reliably enough to allow powerful quantum computers to become a reality.

The result, obtained by a team at UNSW, appears today in the international journal, Nature Nanotechnology.

The quantum code written at UNSW is built upon a class of phenomena called quantum entanglement, which allows for seemingly counterintuitive phenomena such as the measurement of one particle instantly affecting another – even if they are at opposite ends of the universe.

"We have succeeded in passing the test, and we have done so with the highest ‘score’ ever recorded in an experiment.”

“This effect is famous for puzzling some of the deepest thinkers in the field, including Albert Einstein, who called it ‘spooky action at a distance’,” said Professor Andrea Morello, of the School of Electrical Engineering & Telecommunications at UNSW and Program Manager in the Centre for Quantum Computation & Communication Technology, who led the research. “Einstein was sceptical about entanglement, because it appears to contradict the principles of ‘locality’, which means that objects cannot be instantly influenced from a distance.”

Physicists have since struggled to establish a clear boundary between our everyday world – which is governed by classical physics – and this strangeness of the quantum world. For the past 50 years, the best guide to that boundary has been a theorem called Bell’s Inequality, which states that no local description of the world can reproduce all of the predictions of quantum mechanics.

Bell’s Inequality demands a very stringent test to verify if two particles are actually entangled, known as the ‘Bell test’, named for the British physicist who devised the theorem in 1964.

A team of Australian engineers has proven – with the highest score ever obtained – that a quantum version of computer code can be written using two quantum bits in a silicon microchip.

“The key aspect of the Bell test is that it is extremely unforgiving: any imperfection in the preparation, manipulation and read-out protocol will cause the particles to fail the test,” said Dr Juan Pablo Dehollain, a UNSW Research Associate who with Dr Stephanie Simmons was a lead author of the Nature Nanotechnology paper.

“Nevertheless, we have succeeded in passing the test, and we have done so with the highest ‘score’ ever recorded in an experiment,” he added.

In the UNSW experiment, the two quantum particles involved are an electron and the nucleus of a single phosphorus atom, placed inside a silicon microchip. These particles are, literally, on top of each other – the electron orbits around the nucleus. Therefore, there is no complication arising from the spookiness of action at a distance.

However, the significance of the UNSW experiment is that creating these two-particle entangled states is tantamount to writing a type of computer code that does not exist in everyday computers. It therefore demonstrates the ability to write a purely quantum version of computer code, using two quantum bits in a silicon microchip – a key plank in the quest super-powerful quantum computers of the future.

“Passing the Bell test with such a high score is the strongest possible proof that we have the operation of a quantum computer entirely under control,” said Morello. “In particular, we can access the purely-quantum type of code that requires the use of the delicate quantum entanglement between two particles.”

False-colour electron microscope image of the silicon nanoelectronic device which contains the phosphorus atom used for the demonstration of quantum entanglement.

In a normal computer, using two bits one, could write four possible code words: 00, 01, 10 and 11. In a quantum computer, instead, one can also write and use ‘superpositions’ of the classical code words, such as (01 + 10), or (00 + 11). This requires the creation of quantum entanglement between two particles.

“These codes are perfectly legitimate in a quantum computer, but don’t exist in a classical one,” said UNSW Research Fellow Stephanie Simmons, the paper’s co-author. “This is, in some sense, the reason why quantum computers can be so much more powerful: with the same number of bits, they allow us to write a computer code that contains many more words, and we can use those extra words to run a different algorithm that reaches the result in a smaller number of steps.”

Morello highlighted the importance of achieving the breakthrough using a silicon chip: “What I find mesmerising about this experiment is that this seemingly innocuous ‘quantum computer code’ – (01 + 10) and (00 + 11) – has puzzled, confused and infuriated generations of physicists over the past 80 years.

“Now, we have shown beyond any doubt that we can write this code inside a device that resembles the silicon microchips you have on your laptop or your mobile phone. It’s a real triumph of electrical engineering,” he added.

In addition to the team lead by Morello, the work was supported by Professor Andrew Dzurak and his team at UNSW, as well as collaborators from the University of Melbourne and Japan’s Keio University.

BACKGROUND ON UNSW ENGINEERING AND FUNDING OF THE RESEARCH

Associate Professor Andrea Morello’s research is supported by the Australian Research Council via the Centre of Excellence for Quantum Computation and Communication Technology, the U.S. Army Research Office, the Commonwealth Bank of Australia and UNSW. The devices were built at the Australian National Fabrication Facility, supported by the National Collaborative Research Infrastructure Strategy (NCRIS).