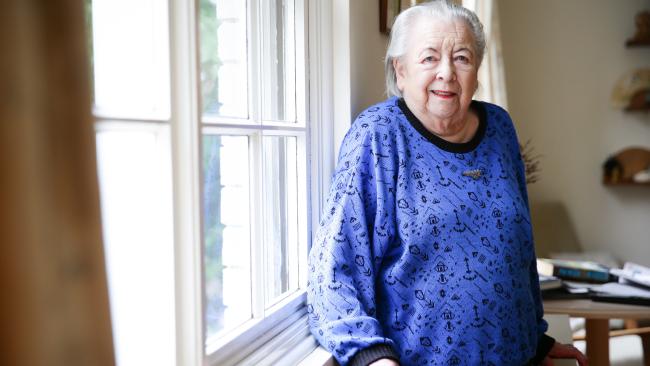 Anita Lawrence is bequeathing half of her estate towards establishing a chair in higher performance architecture at UNSW. Picture: Renee Nowytarger

Anita Lawrence has already given a great deal to the University of NSW. She was, in 1955, one of its first female architecture graduates, returning some years later for a three-decade career lecturing in acoustics and design.

Now Dr Lawrence has returned yet again, bequeathing half of her estate to establish a chair in higher performance architecture, which will focus on emerging research regarding minimising the environmental footprint of buildings using cutting-edge design.

Dr Lawrence said in her early years of study, UNSW had yet to build dedicated facilities for architecture, finally moving students into the Main Building in the year of her graduation.

Dr Lawrence, who was a teaching of postgraduate courses in acoustics said there was “a lot of glass ceiling in those days, so I only got to the position of associate professor”.

She will leave the other half of her estate to Parkinsons NSW and The Smith Family.

“Anita is one of our first cohort of graduates. The establishment of the chair means her academic contribution, philanthropic support and overall service to the university will continue to be honoured in the future,” said Professor Alec Tzannes, dean of UNSW’s Built Environment faculty.

Certainly, philanthropy for Australian universities is under­going something of a renaissance, said Sue Cunningham, president of Washington-based Council for Advancement and Support of Education.

Its recent Ross-CASE survey of 19 Australian and NZ universities shows that since 2012 annual new funds raised had grown to by over 35 per cent since 2012 reaching over $400m in 2014.

“What is exciting about Australia is that a number of institutions are building very professional advancement operations. The level of success they have already demonstrated in attracting philanthropic support is moving faster than it did in the UK,” Ms Cunningham said.

Ms Cunningham, who earlier this year joined CASE from the University of Melbourne, where she led the development of the university’s “Believe” fundraising campaign, urged more universities to sign up to the survey as a way to transparently monitor levels of philanthropic giving.

"The reporting of philanthropy among Australian universities is inconsistent with no agreed system on deciding what counts as philanthropy and what doesn’t", Ms Cunningham said. So far only 14 Australian universities have signed up to the Ross-CASE survey that is now in its third year. All the Group of Eight universities participate, along with Deakin, La Trobe, Macquarie, Queensland University of Technology, RMIT and University of Tasmania.

This week UNSW announced Mattheos Santamouris would be the inaugural appointee in its new chair. Professor Santamouris has had key editing roles at a number of well-regarded journals, including as editor-in-chief of Energy and Building and associate editor of the Solar Energy Journal.

Alec Tzannes, the dean of UNSW’s built environment faculty, said Professor Santamouris’ contribution to the advancement of design sciences “is of global significance and truly exceptional”.

This article was originally published on www. theaustralian.com.au.

If you want to make a bequest to UNSW Built Environment faculty click here.