The spectacular peacock spider dance and its strange evolutionary roots

With their flamboyant dress, and fabulous song and dance routines, tiny peacock spiders have captivated many hearts. But why does this little Casanova put on such a spectacular show? ask Michael Kasumovic, Damian Elias and Madeline Girard. 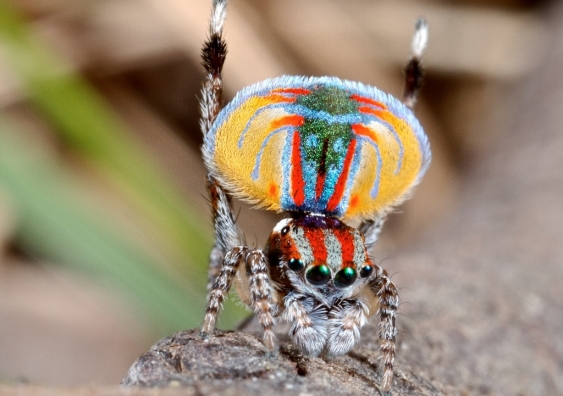 OPINION: With their flamboyant dress, and fabulous song and dance routines, tiny peacock spiders have captivated the hearts of the internet.

Many species have courtship displays, but few are as complex as that of the peacock spider. But why does this little Casanova put on such a spectacular show, particularly when we’d expect evolution to favour simplicity?

We set up an elaborate experiment to find out. But before we raise the curtain on that, we need to set the scene.

What’s in a signal?

Imagine a high school suitor picking up his date for the prom, and we might picture him exiting a limousine wearing a tux with bouquet in hand. We’d argue (and he’d likely agree) that each of these things improves his chances of impressing his date.

But what kind of information is his date gleaning from these signals? Is he trying to make sure that his date notices that he can afford extravagance, and therefore, he’s signalling his wealth and success? Or does the car signal his wealth, his tux his desire to look good, and his flowers his love for nature? If so, then these aspects work together to signal his overall suitability as a mate.

Regardless of what motivated his signals, we’d probably all agree that that this wide-eyed youngster is trying to impress his date. But is this true? Isn’t it just as likely that this extravagance is signalling to other males that they should stay away? Or is it just the social norm to appear in a limo with a tux and flowers, otherwise he’d look out of place?

This is the problem biologists have faced when trying to explain the existence of complex courtship that uses multiple traits: what is driving a male’s improved dress and his desire to impress?

The answer has escaped biologists because single, simple traits are generally the norm. Sometimes we have species that use multiple traits, like the colourful plumage and elaborate dances of some birds, but the use of multiple traits is very rare.

Biologists' favourite example of courtship complexity is the birds of paradise.

With 39 different species, there is a diversity of vocal signalling, extreme variation in colouration and dances that accompany both. But despite our desire to explain this diversity as a result of female preference, there is no such evidence. Until now.

Along came a spider

Peacock spiders (Maratus volans) are a group that is unique to Australia. With more than 40 documented species, and likely many more to discover, it is an example where citizen science is helping us understand the diversity in this group.

It is this diversity, abundance and their extroverted courtship behaviour in the lab that really allows us to explore why such complexity exists and what it means.

So to explore peacock spider courtship, we collected 128 male and female spiders from around Sydney and brought them back into the lab. Then by creating a courtship arena consisting of nylon stretched over a wooden frame and naturalising it with some leaves, we were able to record the behaviours using a video camera and the vibrational songs that males produce using a laser vibrometer.

What we found was rather interesting. We discovered that males use several different aspects to court a female.

Males use vibrations early on to gain a females attention. When they are sure she’s watching, they begin to escalate courtship by waving their front legs and showing off their fan. If the female begins ignoring the male, they change their strategy and begin vibrating more.

We found that there was a very low success rate: only 16 of the 64 males were successful! And it was visual signalling effort that best predicted success – so the tux was more effective than the serenade. It was the males that were best able to show off their fans while ensuring that females were constantly watching.

Our other interesting finding was that females were very clear about what they didn’t like. During courtship, if a female signalled her displeasure by waving their abdomen back and forth, there was a low chance of success. Males therefore received feedback to their performance. So it seems that being attentive pays off.

The low success rate when courting virgin females (and potential death), coupled with the fact that none of our mated females re-mated suggests that success is very low in nature and only the males that best show off their stuff succeed.

What we can learn from little spiders

Female peacock spiders are picky, and it’s this scrupulous behaviour that has likely led to the strong selection for the complexity of male courtship.

Understanding this is important because it provides us with insight into the evolution of traits as signals and the situations necessary for such complexity to evolve. These answers have eluded biologists so far because natural variation in the success of courting males is extremely difficult to observe.

The next step is to explore whether the species that show increased complexity have even pickier females.

But for know, we can learn from these little Aussie wonders and say that if you’re strutting your stuff on the dance floor or through virtual interactions on the internet, pay attention to what the female has to say. Perhaps you may increase your chances as you’ll know where to put your effort.

Check out the video below to learn more about Maddie and some of the diversity in courtship from other species.

Michael Kasumovic is an Evolutionary Biologist and ARC Future Fellow at UNSW.

Damian Elias is an Assistant Professor in Evolutionary Biology, University of California, Berkeley.

Madeline Girard is a PhD student in evolutionary biology, University of California, Berkeley.