The discovery that starlings carrying a new mutation in their mitochondria, the energy powerhouses of cells, almost tripled their population within five years has important implications for mitochondrial diseases in humans. 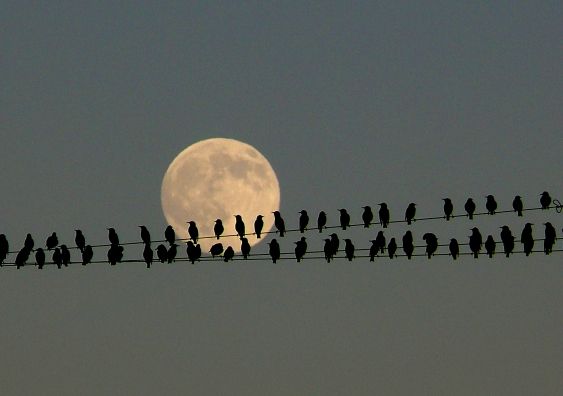 Deakin University and UNSW Australia researchers have made a rare observation of rapid evolution in action in the wild, documenting the spread of a newly arisen genetic mutation in invasive starlings, which could shed light on mitochondrial disease in humans.

The scientists found West Australian starlings carrying a particular mutation in their mitochondria, the energy powerhouses of cells, almost tripled their population within five years, suggesting the mutation was beneficial to the birds on the invasion front.

The first author of the study published in Molecular Biology and Evolution, Deakin University scientist Dr Lee Rollins, said the research was an important step forward in understanding how populations respond to a changing environment.

“Our findings also have important implications for mitochondrial diseases in humans, because this research significantly advances our understanding of how mitochondrial DNA mutations affect individuals and populations, and provides a potential mechanism to explain how different genetic variants may affect health,” Dr Rollins said.

Dr Rollins, from Deakin’s Centre for Integrative Ecology, within the School of Life and Environmental Sciences, said mitochondria were essential for sustaining life and had their own set of genes, usually only inherited from the mother.

“Sometimes mutations occur and an individual person or animal can end up having two different versions of mitochondrial genes within each cell,” Dr Rollins said.

“This is surprisingly common and is associated with many inherited diseases in humans. But we know very little about how different mitochondrial genetic variants compete within individuals.”

The research team, co-led by Dr Rollins and Professor Bill Sherwin of UNSW, in collaboration with the Department of Agriculture and Food in Western Australia, studied the DNA of 279 starlings near Munglinup in the south east of Western Australia and identified birds with a novel mitochondrial genome sequence (Haplotype H).

Our findings have important implications for mitochondrial diseases in humans, because this research significantly advances our understanding of how mitochondrial DNA mutations affect individuals and populations.

This genetic variant is not present in starlings living elsewhere in the country, so is likely to have arisen in this particular population at the invasion front.

Professor Sherwin, of the UNSW School of Biological, Earth and Environmental Sciences, said the advantageous mutation then spread rapidly through the population, with the proportion of birds carrying Haplotype H increasing from 17 per cent to 47 per cent during the five years of the study.

“We also showed haplotype H was associated with a reduction in the number of copies of the mitochondrial DNA in cells, which might indicate that mitochondria in those cells are more efficient,” Professor Sherwin said.

“Biological phenomena are often like the Emperor’s new clothes: everybody knows they should be there, but no-one can see them. We have found evidence of a seldom seen, but often discussed phenomenon, providing the first demonstration of rapid evolutionary selection on the mitochondrial genome within individuals in the wild, as a result of an invasive species moving into new territory.”

Starlings are considered one of the world’s worst invasive alien species, and have been likened to “cane toads with wings” in Australia.

They pose a serious threat to agriculture and the environment and the West Australian government has attempted to eradicate starlings for decades.

“Invasive species usually find themselves in environments where they face novel challenges, and new mutations can help solve these new problems. Our study is one of the first to track this rapid change at a molecular level,” Professor Sherwin said.

The team’s previous genetic work on the starlings helped inform management strategies in WA, by revealing the state’s invasion population did not interbreed much with the three other main populations of starlings in the rest of Australia, indicating that localised control in WA could be effective.