How curiosity can save species from extinction

One simple story about butterflies illustrates the complexity of ecosystems and the importance of research in preserving biodiversity, writes Merlin Crossley. 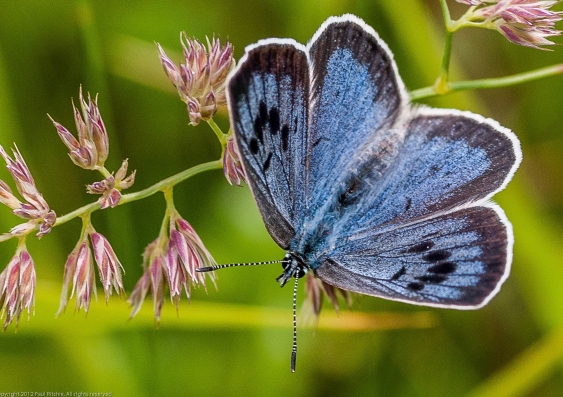 OPINION: If I had been given one wish as a child I, it would have been that the Tasmanian tiger wasn’t extinct. To me extinction was a tragedy. I expect that many people feel the same way.

But it is not easy to save dwindling populations and prevent extinctions. Sure it takes money, but it also takes knowledge. One simple story about butterflies illustrates the complexity of ecosystems and shows how important research and understanding are to preserving biodiversity.

It is the story of the European butterfly, the large blue or Phengaris arion (Maculinea arion in older literature).

In Australia we have lots of butterflies and literally countless moths; the total number is not known. In the United Kingdom, on the other hand, virtually all species have been described.

I visited England several times as a child, and at one stage I sought to see as many of the 60 different species of butterfly as possible. But I was particularly keen to see the large blue because it was rare. It was the first butterfly recorded in the British Isles in 1795 and was much prized by collectors for the very simple reason that it was so scarce.

But over the years the known populations gradually died out and it was given protected status. Britons made efforts to fence off reserves where it remained but, oddly, its numbers continued to decline. By 1979 it was declared extinct in Britain.

But why had all the steps to save this iconic species failed?

One researcher from Oxford University, Jeremy Thomas, led a team of large blue experts to investigate the ecosystem in which it existed. The first step was to try to understand the butterfly. And there was a lot to understand.

It is a remarkable species. The female lays eggs on wild thyme flower buds. Each caterpillar bores into the bud and eats the growing seeds. It needs all the energy in the seeds to survive, and if more than one caterpillar is sharing the bud they will fight things out in a cannibalistic bout until only one remains. This is a taste of things to come.

After about a week eating the seeds and flower it drops to the ground and waits until it is found by a special species of ant. It excretes a substance that feeds the ant, but also influences the ant’s behaviour. The ant goes and fetches fellow ants that carry the caterpillar down into the nest.

Once inside the nest the caterpillar does a remarkable thing: it feeds on ant larvae until it finally pupates. When it is ready to emerge as a vulnerable new butterfly it begins making sounds that appear to appease the ants. It then emerges, protected by a guard of ants, and climbs up out of the nest to stretch out its wings.

The critical point is that the large blue doesn’t just depend on any old species of ant, but on very particular species. It has evolved to exude chemicals that influence red ants of the species Myrmica sabuleti or M. scabrinodis.

These ants also have very specific requirements, this time in terms of temperature and moisture. If the ground is too hot or too cold they don’t thrive and other species take over.

Ground temperature and moisture depend on the height of the grass. The grass needs to be short, so grazing is important. It turns out that fencing off reserves actually interfered with the life cycle of the butterfly because the grass grew too long, and the ground wasn’t right for the ants.

Similarly, the spread of myxomatosis and reductions in the rabbit populations also meant the grass grew too tall, again altering ground temperature and helping drive the decline in large blue populations.

Due to the careful work by Jeremy Thomas and colleagues, all this is now known. Fortunately, unlike the Tasmanian tiger, the large blue was extinct only in the British Isles, and not in mainland Europe, thus it has been possible to re-introduce it into Britain.

It has also been possible to manage the habitat to allow grazing so that the ant colonies thrive and the butterfly also seems to be doing well.

Parts of the odd life cycle of this butterfly were known as far back as 1915, but there was no understanding of the connection to the ecosystem and landscape, so the vital step of controlling the grazing was not considered.

The story shows how things can be complex and inter-connected, and that only by understanding all the facets can one intercede to put things right. It also illustrates how the careful application of science can make a difference.

One can never tell when and how, or even if, new knowledge will ever be useful. Scientists collect knowledge partly because they want to improve the world, but often just out of curiosity.

Sometimes curiosity driven research is criticised as self-indulgent, and unlikely to make a real difference to our circumstances. Sometimes it is said that researchers should just go straight for the biggest problems and tackle them straight on, or that research should be aimed purely at applications. This is increasingly heard these days given the new emphasis on innovation and the commercialisation of research.

But in reality we need science most when we have tried tackling the problem and got stuck. Everything people had tried to preserve the large blue had failed. Only knowledge provided a way forward.

Curiosity driven science often provides solutions when we are stuck and without it we will sometimes remain stuck forever. In the case of the Tasmanian tiger I believe we are stuck forever, but there are many other things to preserve and careful in depth science can make a difference.

Merlin Crossley is Dean of Science and Professor of Molecular Biology at UNSW.