From singing the national anthem to active duty in the Middle East, UNSW-trained psychologist Sarah Watson's unusual career path is driven by a passion for helping others realise their potential. 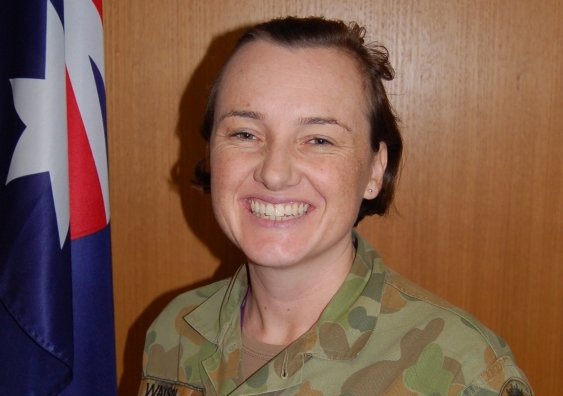 Musician to military psychologist might seem like an unlikely leap, but Sarah Watson is driven by a passion for helping others realise their potential.

Watson was a singer in the Navy for 10 years before realising that psychology was her calling, inspired by the nurturing and mentoring of senior officers to pursue a career in human behaviour.

“The decision in the end to pursue psychology was borne out of a recognition and gratefulness for how others had helped me achieve some of my goals,” said Watson, who has undergraduate degrees in both psychology and music.

“The intent was that I could hopefully help others to achieve their goals as well, utilising the professional skills and expertise that I believed studying psychology would give me.”

Experiences in the field helping Australian troops deployed in the Middle East prepare for their return home – “an incredibly important role” – cemented her decision to pursue a Masters in Organisational Psychology to further her skills.

“Being part of that transitioning team, whilst it can have its challenges, is also an incredible privilege as you try to assist others to prepare mentally for the return home to family after a long period away and working in some very difficult situations,” she said.

“There remained an ongoing and increasing interest for me regarding human potential, leadership capability, and team functioning, fields that feature prominently in the organisational psychology space.”

With the support of the ADF, Watson returned from active duty in the Middle East in late 2012 to undertake her Masters in Organisational Psychology at UNSW in 2013, a rewarding experience she said “challenged and strengthened my capabilities.”

It was no mean feat – balancing study with full-time work and two young children has required nothing less than military precision in scheduling and time management.

It would not have been possible without the encouragement of the ADF and the provision of a year-long scholarship at the commencement of her degree, which she is due to finish in October with the completion of her thesis, she said.

Watson said the UNSW program had a strong reputation within Defence and she was impressed by its currency and relevance, with prominent links to industry and leading practitioners lecturing in the course.

Staff were also keen to hear about and learn from her experiences in the field and incorporate them into their teaching, which she “really valued and respected.”

The most rewarding part had been putting what she’s learned into practice, implementing new techniques to strengthen the resilience of personnel and boost team dynamics, both critical in facing the rigours of military service.

“There are many challenges, amongst them the requirement to move work locations and roles every couple of years, to regularly go away on training courses, be deployed, work irregular hours and to be involved in some very different and sometimes challenging situations and environments,” said Watson.

In her most recent role, Watson conducting psychological assessments for the defence force and critical incident and operational mental health support. She has a particular focus on resilience and mental health and wellbeing in the workplace.

“There is something inherently satisfying in helping others identify what their strengths and abilities are, be it at the individual, team or organisational level, and then being able to identify how these strengths might be put to best use to maximise capability and effectiveness,” she said.

Sarah Watson was recently profiled in the Sydney Morning Herald as part of a feature on psychology careers. Read the story here.