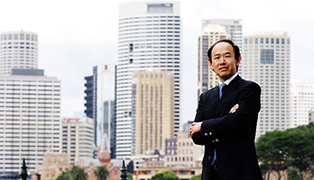 The youngest recipient in the history of the accolade, Iwan Sunito has made an impressive contribution to Australia’s property industry since co-founding Crown Group with business partner Paul Sathio two decades ago.

Born in Indonesia in 1966, Iwan spent his childhood in Central Kalimantan on the island of Borneo before he migrated to Australia to study architecture at UNSW.

With Sunito at the helm, Crown Group has grown to become one of Australia’s most prolific private development companies with a multi-million dollar portfolio of projects in development.

Sunito said the award was a celebration of Crown Group’s journey; from its first development in Bondi to an internationally-recognised global brand.

“I am immensely honoured to receive this award which pays tribute to the efforts and hard work of our whole team and could not have been achieved without my business partner Paul Sathio. It is an acknowledgement of many years of commitment to innovative design and quality in everything we do. Our philosophy is not ‘bigger first then better’ but rather ‘better first and bigger will follow’. At Crown Group we are conscious that we are not simply building apartments but building a legacy for many people and this drives us to continually push the boundaries of innovation,” he added.

Crown Group broke company sales records when it sold more than $380 million worth of apartments in one day at the launch of its latest landmark development in Green Square Infinity by Crown Group, on August 29.

The company’s major projects under construction include the 29-storey V in Parramatta, the 20-storey Skye in North Sydney, the popular inner-west development Oasis and a 25-storey residential tower at Clarence Street; in the heart of Sydney’s CBD Urban Taskforce CEO, Chris Johnson said Sunito’s story was one of commitment and perseverance.

“Iwan has grown Crown Group in less than 20 years into one of Sydney’s major developers of upper end apartments,” Mr Johnson said.

“The recent success of Infinity, where more than 300 apartments were sold in one day, demonstrates the entrepreneurial approach of Iwan and his team. He is a classic success story through his drive and commitment to quality that have lifted him from his early days in a small town in Central Kalimantan, Indonesia to studying architecture at the UNSW, to forming the Crown Group with business partner Paul Sathio in 1996 and now running a development company worth many millions of dollars,” he added.

Urban Taskforce Chair, Peter Daly said: “Iwan Sunito represents a new wave of entrepreneurial developers who are creating apartment buildings that convey the excitement of urban living. I congratulate Iwan on his incredible achievements over a relatively short period of time.

He joins a distinguished group of property persons of the year who have all contributed to our industry. Last year Tony Perich of the Greenfields Development Country was honoured by his peers. He and Iwan join major contributors to the property industry like Steve McCann, Lend Lease; Ross McDiven, Brookfield Multiplex, Harry Triguboff, Meriton; Lang Walker, Walker Corporation; Gary Rothwell, Winten Properties and many more.”

In recent years Sunito has been interviewed on major television networks across Australia and Asia and received a number of awards including Indonesia’s Property & Bank Magazine Golden Leadership Award 2013, the 2013 Congress of Indonesian Diaspora Entrepreneur award and named a winner in the 2013 Ernst & Young Entrepreneur of the Year Awards. Summary of recent personal achievements:

Iwan has been recognised with numerous awards in Australia and overseas; including:

As an industry expert, Iwan has been invited as a special guest speaker to address audiences at:

Founded in 1994, Crown Group has offices in Australia, Indonesia and Singapore and is currently developing in Australia and Indonesia.

The company was co-founded by architect Mr Iwan Sunito and engineer Mr. Paul Sathio in 1994.

Iwan Sunito graduated with Bachelor of Architecture (Hons) and Master of Construction Management from University of NSW. In 1993 Iwan became a Registered Architect in NSW and was awarded the UNSW Eric Daniels award for excellence in residential design.

In recent years Iwan received a number of awards including Indonesia’s Property & Bank Magazine Golden Leadership Award 2013, the 2013 Congress of Indonesian Diaspora Entrepreneur award and named a winner in the 2013 Ernst & Young Entrepreneur of the Year Awards.

Since the company was founded 21 years ago, Crown Group has successfully completed major developments in Sydney’s best locations including Bondi, Bondi Junction, Parramatta, Ashfield, Epping, Homebush, Newington, Pennant Hills and Rhodes and most recently Viking by Crown, a 10-storey residential complex in Waterloo.