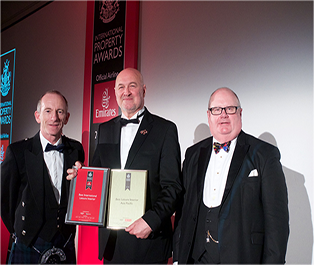 On the 7th December 2015, design and property luminaries from around the world gathered in London’s Marriott Hotel in Grosvenor Square for the 2015 International Property Awards (IPA). Attending this event was a UNSW Built Environment alumnus Terry A. Spinolo whose Hong Kong based practice, INARC Design, was the recipient of four awards at this year’s ceremony.

Above: Terry Spinolo (centre) accepts one of his many awards from Stuart Shield, Chairman IPA and Sir Eric Pickles, UK Special Envoy.

Above: The 1,500 square metre Beijing residence. INARC was commissioned to supply archtectural and interior design.

This is a hat-trick for INARC having been named “World Best” in the Leisure Interior category for three years in a row which is extraordinary as this year saw over 2,000 entries from 100 countries.

Over 70 independent judges are involved who are chaired by two illustrious men. Lord Caithness is Chairman of Judging for the Development Categories and Lord Best is Chairman of Judging for the Real Estate Categories. Lord Caithness is a conservative politician who served as Government Whip under Margaret Thatcher. Lord best is also a member of the House of Lords and is known as a leader on British social housing issues.

Spinolo graduated from UNSW Built Environment in 1977 with a degree in Architecture. His first project was to renovate his parents’ house. “Renovating the family home gave me valuable practical experience with the many building trades,” says Spinolo. He went onto to work for a residential architect and joined the architect’s branch of the NSW Public Works. In 1982 an opportunity presented itself to work in Hong Kong. He managed two local businesses there and then he founded his own design practice in 1988.

Above: The entrance to The Derby Lounge designed by INARC.

Above: The entrance to The Melody Lounge at the Hong Kong Jockey Club.

Since starting INARC 28 years ago, Spinolo has had many successes. He has provided architecture and interior design for clients in Hong Kong, Singapore, Philippines, Myanmar, People’s Republic of China, Thailand, Macau, Switzerland, United Kingdom, France and India. I think we can safely call his a “global career”. In 2013 INARC was awarded a Special Award for Small and Medium-sized Enterprises by the Hong Kong Management Association (HKMA). This was the first time a design firm had been handed this gong. Over the last six years INARC has won a whopping 23 awards from the IPA.

At least we know he’ll be able to design a very smart trophy room to house all these accolades.

Additional reporting and all images supplied by INARC Design Asia.

If you are interested in having a global career in the architecture or interior design fields, click the following links...

I want to be a global Architect

I want to be a global Interior Architect