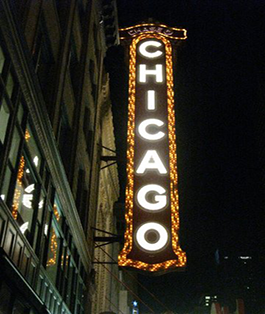 One of the reasons UNSW School of Built Environment postgraduate courses are so popular are the international studios on offer. These are usually collaborations with overseas industry and/or university partners where a group of students are invited to work on a real life problem another community or region is experiencing. In this case, the Master of Urban Planning and Strategy students were invited by Leanne Redden, Executive Director of the Regional Transport Authority (RTA) in Chicago to look at land surrounding certain public transport hubs and devise ways they could be developed and increase the number of public transport users, or ridership.

Redden is no stranger to public transport issues. After she graduated from UNSW in 1987 with a Bachelor in Urban Geography (her minor was economics) she did an exchange program with the University of Illinois. After completing her Masters in Urban Planning she stayed in the US and got an internship with a local planning department in Chicago. They offered her a job and sponsorship and she was on her way. After spending 12 years in town planning with a focus on transport, she then worked for the Illinios Tollway Authority and 10 years ago was head-hunted by the Chicago RTA.

As Executive Director, she has a mammoth task. Two million people catch public transport a day in Chicago and it's Redden’s job to make sure they all get to their destination as quickly and cheaply as possible while increasing ridership. Redden explains, “It’s a huge puzzle. The pieces are engineering, land use, transport, governance and politics. We need better land use decisions; we need to get some cars off the road. Millennials don’t want to drive. They want maximum screen time and they want to be moved quickly and cheaply.”

The students were asked to look at two areas of concern; West Chicago and Forest Park, concentrating on certain transport station hubs and how to encourage redevelopment in the vicinity of these hubs that were located in deprived areas. As with most communities there were unique factors to consider. The suburban locations have a large Hispanic population and used to be manufacturing based, which has disappeared, and changes the economic landscape of a community. The students were also required to consider governance and land use factors – what were the opportunities and hindrances? “We took the students on site visits. They rode on all the (public transport) systems. They met with Mayors, business owners, local planners. They also met with the Metro Planning Organisation who have a comprehensive master plan over the whole area,” said Redden who also explained networking was a key feature of the workshop. “The students now have connections across the mid-west of America. We now have broad and deep connections in Australia and deep connections at UNSW.”

The structure of the workshop was a multi-faceted and multi-disciplined public policy approach that utilised real work and real life experience. The students got to use skills gained from their present jobs and also from their present study. Having the opportunity to combine these and apply them to a problem that is actually happening benefits both students and the RTA. The students get to test key learnings and skills while the RTA hopes viable solutions will surface from people who are not immersed in the local community and might identify opportunities that are not obvious. “The problems with transport from city-to-city can feel like the same play with different actors. The students were able to give us some highlights and some key ‘take-aways’” says Redden, “The final report by the students is titled Maximising Transit Orientated Development Opportunities in Chicago. The students were asked to explore best practice ways to increase infill development around low to middle income transit areas with two key case study areas.  Students provided both policy development recommendations as well as short term and location specific recommendations around the case study areas.

Within their more detailed report some of the highlighted recommendations included developing a framework that highlights transit-orientated development (TOD) priority areas spatially that would direct and prioritise investment and define clear measures of success.  Students highlighted concepts of building partnerships and specifically pooling resources with other agencies and the private sector to maximize benefits.  They also proposed, for example, following the Newcastle City Futures initiative at a local scale as a best practice we could model.”

One of the key areas of concern for Redden is sustainable transport which includes sustainable public transport. That doesn’t just mean commissioning buses that are compressed natural gas or hybrid, which they have done. It means getting more cars off the road, employing green transit plan metrics, greening bus stops and bus depots. We know that these initiatives save money and Redden is no “anti-car” zealot. “It’s about a shared mobility eco-system and where is our (public transport’s) space in this?”

According to UNSW School of Built Environment’s City Futures Research Centre, more than one-half of the world’s population lives in urban areas. By 2050, that will increase to two-thirds. “Transport choices are made daily, depending on what you want to do that day and where you want to go. It might not include public transport; it might include bike sharing or car sharing.” With eight million people over five counties that Redden and her team are responsible for, that’s a lot of choices their transport policy must address.

Redden was instrumental in developing strategic long range planning initiatives for the region’s transit system and was a key player in the state’s 2008 funding reform legislation.  Under her leadership, the RTA Planning Department completed the first regional market and systems analysis and bus rapid transit work, including the region’s first bus-on-shoulder service and secured $40 million in federal funds to support the development of the regional Traffic Signal Priority Program, as well as funds for the region’s first Green Transit Plan.

Prior to joining the RTA, she served as the Chief of Planning at the Illinois Tollway, and the Director of Transportation for the Village of Schaumburg. She has a Master’s Degree in Urban and Regional Planning from the University of Illinois Urbana-Champaign and a Bachelor’s Degree from the University of New South Wales, Australia.  Redden is also certified by the American Institute of Certified Planners (AICP).

STUDENTS WHO ATTENDED THE CHICAGO STUDIO