​A missed apostrophe and a drink from a peanut butter jar. Two valuable lessons alumnus Tim Fung, CEO of AirTasker, learned during his time at Macquarie Bank. 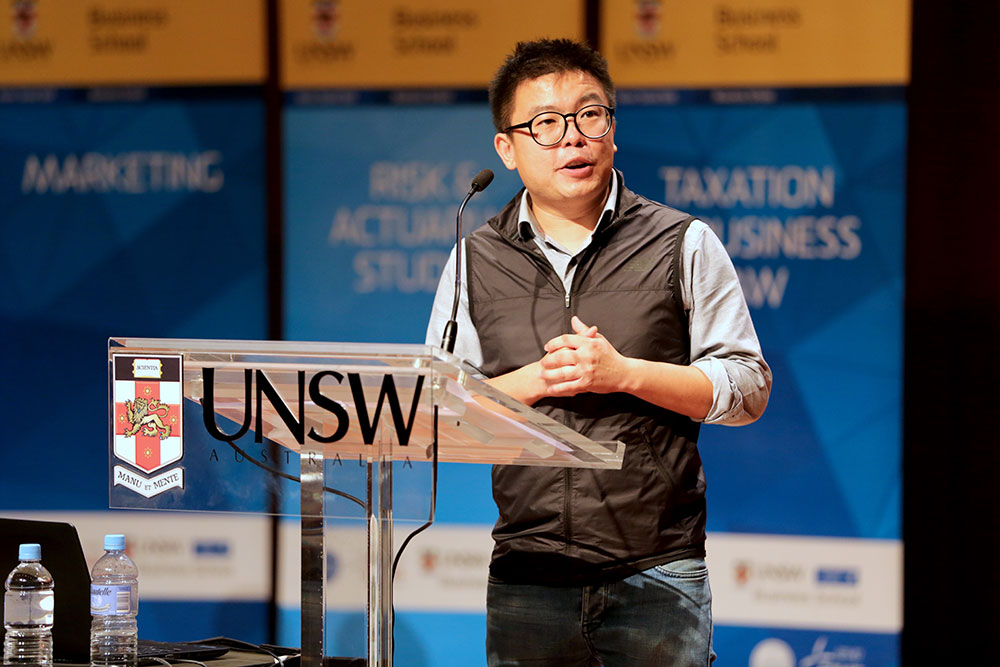 A missed apostrophe and a drink from a peanut butter jar. Two valuable less​ons alumnus Tim Fung, CEO of AirTa​sker, learned during his time at Macquarie Bank. “I spent all night working on a report for my boss. When I sent it off I was pleased. I thought I did a great job. But the next morning I got smashed by my boss,” Fung explained to a nervous but smiling crowd at UNSW Business School’s 2016 undergraduate orientation.​

“The email was missing an apostrophe and my boss called me out. I was upset; it’s just an apostrophe I thought. But looking back, that moment provided me with one of my greatest lessons: always check and double check your work. Mistakes like this can stuff you up and that’s the last thing you want when you are about to close a deal.”

Fung’s time at Macquarie was short lived. It ended with him drinking water from a cleaned out peanut butter jar. “All the dishes in the office kitchen​ were dirty, but there was this one perfectly clean peanut butter jar. So I thought, why not and I filled it with water and returned to my desk,” Fung said. “A director walked by and saw what I was doing and looked appalled. It was then that I knew I needed to move on from Macquarie and find a culture with a more ‘out-of-the-box’ perspective.”

Fung’s address was filled with these ‘moments of insight’ as he tracked for students his journey from UNSW Business School to startup CEO. After Macquarie, Fung decided to take a different course. Inspired by his favourite show Entourage, he applied to talent management agencies with the hope of becoming the next Ari Gold. “I applied to every agency in Sydney. Only one got back to me, but that was enough. They took a chance on me and it led me into a whole new world,” Fung noted.

Between the parties, the fancy offices, and the exotic casting shoots, Fung learned the endorsement and sponsorship business and worked with leading industry experts. His foray into the talent business eventually led Fung into the startup world. The owner of his talent agency, intrigued by a former investment banker looking to make it in the entertainment world, approached him with interest in working on side projects. Those side projects turned into the founding of amaysim, an online mobile network listed on the ASX.

Reflecting on his time as a talent agent, Fung advised students to “Pursue what you like. It’s not worth making a lot of money in those first years out of uni. Instead, surround yourself with cool, smart, interesting people and see where that takes you.”

Fresh off the success of amaysim, Fung reached out to a friend from uni, Jono Lui (BE (Tele) 2006), and the two spent their days dreaming up tech ideas. It wasn’t until Fung had to move house that the idea for AirTasker took hold. “My friend Ivan You (BCom 2006) had a big truck, perfect for moving. I asked if he would help and he said yes. He spent the day driving my stuff around Sydney, helping me clean and set-up my new place. At the end of the day I gave him a case of beer as a thank you,” Fung explained.

“To my surprise my friend was a bit miffed. He thought it was a bad deal for him. He just spent an entire day helping me move, driving his truck around, and all he got was a case of beer. This got us thinking.”

That thought was why we use friends for tasks like moving. It’s not about money, Fung concluded, it’s about finding trustworthy people. Like all his previous ‘moments of insight’ this led Fung to his next chapter as co-founder and CEO of AirTasker.

“We wanted to build a network of trustworthy people who could help you do anything,” Fung explained. “When we set out to do this everyone told us we were crazy. Don’t take the risk. It is going to be hard. How are you going to build critical mass?”

Fung didn’t let the naysayers distract him. “Sometimes being a little foolish and naïve is a good thing. You have the chance to believe in your ideas and create something that if you were a bit older and more conservative, never would have gotten off the ground.”

While the early days of AirTasker may have been hard, Fung explained, his persistence paid off. The company has over 450,000 users and is currently processing $40 million worth of job transactions annually.

Fung ended his address to students with lasting advice from his father John Fung. “Your reputation is worth more than your bank account. Treat people well. Take advantage of your connections and seize opportunities. Turning the why into why not can help you achieve anything