The challenges ahead for Myanmar’s new leaders

The dawn of a truly democratic era in Myanmar will depend on delicate dialogue in the lead-up to the appointment of the new president, writes Melissa Crouch. 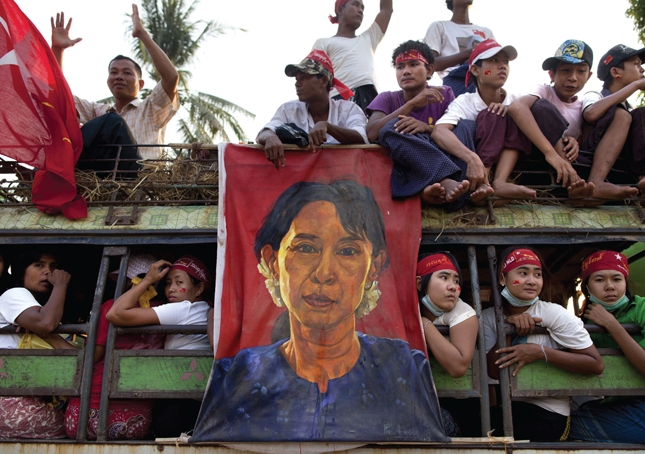 OPINION: Ever since the National League for Democracy won a significant victory in Myanmar’s November 2015 elections, attention has turned to who will become president for the next five years. This issue has generated a large amount of interest not only because the president holds a significant amount of power under the 2008 Constitution, but also because the most favoured person, Daw Aung San Suu Kyi, cannot be nominated. The constitutional requirements for presidential nominees appear designed to explicitly exclude Aung San Suu Kyi.

So who are the new leaders of Myanmar, how are they appointed and what constitutional challenges will they face moving forward?

The quality and skill of the country’s new leaders will determine the NLD’s impact, and this goes beyond the leadership of the president. On 1 February 2016, the new members of parliament took office in Naypyidaw, the capital city. The NLD has a majority in both houses of parliament, although its members sit alongside a handful of members of parliament from ethnic political parties and members from the Union Solidarity and Development Party (backed by the military), as well as the 25 percent of non-elected members from the military.

The recent appointment of the upper and lower house speakers reflects a necessary mix of historical legacy, political pragmatism and calculated diversity. The Speaker of the more powerful Pyithu Hluttaw (lower house) is U Win Myint, a long-time NLD member and member of parliament since 2012. He is accompanied by Deputy Speaker, U T Khun Myat, who is said to be close to Thura Shwe Mann, the former Speaker and USDP member. The NLD will rely on them to keep parliamentary proceedings in order and in line with the NLD’s legislative agenda.

The Amyotha Hluttaw (upper house) consists of representatives from each of the state and region parliaments and is designed to represent the interests of the officially ‘recognised’ ethnic groups, which are divided into eight broad categories that include ethnic Burmans, Kachin, Karen, Mon, Chin, Shan, Kayah and Arakan. This rigid ethnic recognition is overlaid with religious diversity; while a majority of people in Myanmar are Buddhist, there are significant Christian and Muslim communities. The appointed Speaker for the Amyotha Hluttaw is Mahn Win Khain Than, a Christian Karen who is known as the grandson of one of the seven martyrs in 1947. The Deputy Speaker is U Aye Thar Aung, of the Arakan National Party that defends a pro-Rakhine Buddhist agenda in Arakan State, where a third of the population are Muslim.

The parliament is now deliberating over the presidential nomination process. The process under the Constitution is conducted by the parliament, rather than a direct election of the president by the people. Three nominations will be put forward. One each from the upper and lower house, dominated by the NLD, and one from the military members of parliament. The criteria for presidential nominees in section 59 of the 2008 Constitution have been carefully crafted by the former military regime. Not only must the nominee have resided in Myanmar for more than 20 years, they must be a citizen of Myanmar and at least 45 years old. Crucially, neither they nor their partner or children can hold foreign citizenship, according to the now infamous section 59(f). Aung San Suu Kyi’s late husband and children hold foreign citizenship and this bars her from being nominated. The nominee must also be familiar with military affairs under section 59(d). Changes to this section to replace the word ‘military’ (sit-ye) with the word defence (ka-gwe-ye), as a subtle image make-over for the military, were approved in 2015 by parliament, although the matter was never put to a referendum to complete the amendment process.

There are two possible outcomes of the presidential nomination process. One is that a proxy president from the NLD will be put in place and answer to Aung San Suu Kyi. While some commentators have been confident enough to eliminate the possibilities down to a single person, this is still largely a matter of speculation. The other controversial option being discussed is to find a way to bypass the Constitution so that Aung San Suu Kyi can become president immediately, with the intention of then formalising this arrangement through constitutional amendment.

In particular there has been speculation that the NLD may attempt to suspend section 59(f) to enable Aung San Suu Kyi to become president. This is where most foreign media have failed to understand the reasons why this is considered a possibility and the historical precedent on which it may be broadly based. Two past incidents are remembered in Myanmar as circumventing the 1947 Constitution.

First, the Constituent Assembly members that drafted the 1947 Constitution were appointed to parliament with the intention that they would step down within six months once national elections were held. However, the members were allowed to continue to serve in parliament beyond this deadline. This contradicted the six month limit set by the 1947 Constitution. The pragmatic reason given was that elections had to be postponed because of the serious conflicts that threatened the ‘Rangoon’ government. The legal reason given was based on the interpretation of the then Chief Justice U Chan Htoon, who took a rather generous and pragmatic reading of the Constitution, suggesting that the six month limit did not actually apply to the former Constituent Assembly members.

The second key historical incident on which the idea of ‘suspension’ of a provision of the Constitution is based occurred in 1959. At this time, the six month limit of General Ne Win and his caretaker government came to an end according to the 1947 Constitution. This led to fierce parliamentary debates as to whether the 1947 Constitution should be formally amended by suspending the provision that permitted non-elected members of government to serve for no more than six months. There was serious opposition to this proposal and some warned it would set a negative precedent and lead to dictatorship. But those in favour overruled the 29 members of parliament who voted against the proposal. The constitutional amendment law of 1959 claimed totemporarily ‘repeal’ this provision until a new Prime Minister was appointed. In effect, it suspended a provision of the Constitution to allow Ne Win and his caretaker government to continue to rule until an election was held in 1960.

The difference between 1959 and the present is that the 1947 Constitution allowed constitutional amendment if the proposal had been passed by both houses of parliament, and then approved by two thirds parliament sitting jointly. The 1947 Constitution specifically allowed any provision to be repealed, varied or added to via the amendment process, and this was interpreted as including a ‘temporary’ repeal.

The 2008 Constitution in contrast requires a much more difficult process and it does not mention suspension of a provision. It then comes down to the interpretation of the Burmese phrase. Does the word ‘amendment’ (pyin-sin-chyin) in the 2008 Constitution include efforts to (temporarily) repeal, vary or amend? This would require a determination by the Constitutional Tribunal to resolve, but if the Tribunal follows past interpretation then the answer is possibly yes.

In short, while some practitioners claim a law could be passed to temporarily suspend article s59(f), there appears to be no legal basis for this claim.

Priorities and Limitations of the New Government

Once the presidential nomination process is complete, the President will then determine the number of ministries and appoint all ministers, all Chief Ministers of the States and Regions, the Attorney General, and the Union Election Commission members, among others. The appointments for Shan State and Rakhine State will be particularly important, as the NLD does not enjoy a majority in these parliaments.

Over the next five years, the President and its NLD-majority government has a significant opportunity to further the democratic reform process, - yet there are things they can and cannot do.

The NLD does have a majority in both the upper and lower house and so it will have the power to pass any laws it chooses. The only brake on the legislative process is that the military, USDP and ethnic members may decide to challenge legislation in the Constitutional Tribunal on the grounds that it is unconstitutional. This could lead to a ‘dialogue with dictators’, with unelected military members of parliament bringing cases before the Tribunal. Given that the NLD-dominated parliament is likely to re-elect a new bench to the Constitutional Tribunal, it may be less open to such applications.

The parliament is still graced by the presence of military members of parliament who are unelected. Forming 25 per cent of the seats, these military members will no doubt keep a close watch on the decisions made by the NLD. One of the vice-presidents will also be chosen by the military. The biggest roadblock that the military is likely to pose is to the possibility for constitutional amendment, and it is here where dialogue with dictators is most needed.

The NLD will be able to propose a bill for constitutional amendment, but the chances of success will depend on the agreement of at least some military members of parliament. To amend key provisions of the constitution requires more than 75 percent of the vote in parliament, and more than 50 percent of eligible voters at a referendum. Even if military approval can be gained for constitutional amendment, the referendum could also be difficult. The turnout rate for voting at the national election was only 69 percent, and the NLD gained no more than roughly 60 percent of the votes.

It is not only the constitutional amendment but also the implementation of government policy that will require the President to find a way to work with Commander-in-Chief Min Aung Hlaing. According to the Constitution, the Commander has power to choose the heads of several key ministries: the Ministers of Defence, Home Affairs and Border Affairs. Given that the backbone of government bureaucracy – the General Administrative Department – falls under the Ministry of Home Affairs, cooperation will be critical.

Reform of the judiciary is also likely to be a key concern for the NLD. The NLD’s Manifesto, issued in October 2015, identified judicial independence and fairness in judicial decision-making as a core concern. The role of the Supreme Court was extolled and reinforced. No mention was made of the Constitutional Tribunal - a convenient silence. This omission suggests that the Tribunal may not feature in the NLD’s future vision for a democratic Myanmar, but to abolish the Tribunal would itself require constitutional amendment.

Either a proxy president or Aung San Suu Kyi herself will take over as President on 30 March 2016 – when the current President Thein Sein’s term ends. He or she will serve until 2021, and has the possibility of being re-nominated for a second term. The NLD has called for patience and indicated it may not hold the final nomination procedure until March.

Dr Melissa Crouch is a lecturer in Law at UNSW.

This article was first published on ConstitutionNet.org