An ancient Australian connection to India?

When was the Australian continent first settled, asks Darren Curnoe. 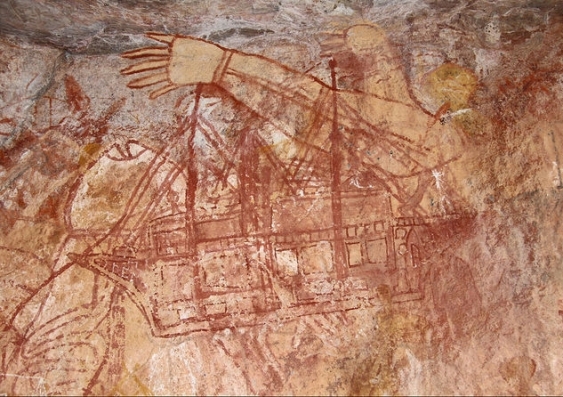 OPINION: When was the remote Australian continent first settled? Where did these ancient Australians come from? Was the island settled once, or on multiple occasions? Is there a genealogical connection between the Indigenous people of Australia and India?

These are questions I’ve spent almost two decades cogitating, and some of them have been pondered now for almost 400 years by European scholars.

Way back in 1623, while on route through the Torres Strait, the Dutch explorer Jan Carstenz (or Carstenszoon) was the first to write about these issues in describing the physical appearance of Indigenous Australians.

He likened people in the north of the continent to so-called ‘Indians’ of the Coramandel of New Zealand, or Maori people of the North Island.

The descriptor ‘Indian’ was used widely in those days to refer to populations across the New World, and didn’t imply any genealogical relationship with South Asians as such; that connection would be made by Thomas Henry Huxley more than two centuries later.

Huxley was by far the most influential early European thinker about human origins. Champion of Darwin’s theory of evolution, as a young man Huxley visited Australia on the HMS Rattlesnake in 1847, 11 years after Darwin came here on the HMS Beagle.

While he showed little interest in anthropology at the time, he would subsequently go on to found human evolution science and strongly shape Darwin’s ideas about our origins.

In 1870, in On the Geographical Distribution of the Chief Modifications of Mankind, Huxley proposed that Indigenous Australians were closely related to the people of South Asia, confidently asserting:

‘the only people out of Australia who present the chief characteristics of the Australians in a well-marked form are the so-called hill-tribes who inhabit the interior of the Dekhan, in Hindostan.’

While based on speculation, rather remarkably, I think, his ideas would come to be influential up until the 1970s; only to be rekindled by geneticists in 1999.

One physical anthropologist who was especially infleunced by Huxley’s musing was Joseph Birdsell. He worked in Australia from the 1940s, writing about the continent’s Indigenous people until his death in the 1990s.

Birdsell developed a model for the peopling of Australia proposing settlement in three waves; with people coming from Southeast Asia, followed by more people from Japan, and later from India; modern Indigenous people being a kind of mix of the three groups.

His model has been long discredited among anthropologists because it finds no support in fossilised human remains - the only physical evidence we have for the earliest people in Australia.

Moreover, his intellectual contemporary and rival, Andrew Abbie, failed to confirm Birdsell’s ideas during the extensive anthropological surveys he undertook with living Indigenous people across the continent.

Enter the geneticists Alan Redd and Mark Stoneking who in 1999 took a leaf out of Huxley’s writing and published evidence for a maternal genetic connection between Australia and India.

To bolster their ideas, they linked their findings to events seen in the archaeological record, especially the arrival of the dingo, as well as perceived language similarities and even Birdsell’s ideas about migration.

Redd and Stoneking suggested that people from India arrived in northern Australia sometime around three and a half thousand years ago and left a major genetic and cultural legacy with the Indigenous people of the Northern Territory today.

Some archaeologists had argued in the 1970s and 1980s that there was indeed a sudden change in the kinds of tools being made in northern Australia - known as the ‘Small Tool Tradition’ or ‘Backed Blades’ - broadly coincident with the arrival of the dog, and indicating the arrival of a new people.

Yet, Backed Blades were later shown to be present in archaeological deposits near Sydney dating back to about 8 thousand years old and in northern Queensland to around 15 thousand years old. The contradictory evidence was overlooked by Redd and Stoneking.

Their work was followed by more genetic studies supporting the hypothesis and a range of others seemingly rejecting it.

Then last month, the latest salvo against the India connection was launched and, I must confess, I may have greeted it a little too enthusiastically.

The work, led by Anders Bergström of the Wellcome Trust Sanger Institute, and published in Current Biology, fully sequenced and compared globally the Y-chromosomes of 13 Aboriginal Australian men.

In a nutshell, their study found that Aboriginal men are descended from early modern human populations identified as living broadly across East Asia by at least 60 thousand years ago.

A subset of these people migrated to New Guinea and Australia, settling these areas by about 55 thousand years ago, according to genetic clocks.

The research has confirmed a large number of other genetic studies showing that soon after Australia was peopled, Indigenous New Guineans and Australians became isolated from each other, except in a few places in the north like the Torres Strait.

A very ancient origin for Indigenous Australians is also supported by the human fossil and archaeological records showing an arrival at least 40-50 thousand years ago or more.

Even Redd and Stoneking and their subsequent supporters all agreed on these points.

Australia was also, according to last month’s research, peopled once, and only once, before Europeans came by the boat load from 1788. No signs of Indian gene flow here; contrary to Redd and Stoneking’s ideas.

Yes, there was certainly trade and contact with the outside world, such as with the Macassans from Sulawesi beginning in the 1600s. But it seems for the most part not to have left a genetic footprint among living Aboriginal people.

Now, all of this leaves really only the geneticists arguing over the India connection, and they seem to be coming at the question from quite different angles; despite using very similar kinds of evidence.

Why such strong disagreement? I think the simplest explanation is that we don’t yet have enough data to provide a clear answer, from the DNA or human fossil remains. Archaeology is clearly very important, but not the full picture.

Aboriginal Australians have without doubt been living here for tens of thousand of years, but whether they were completely (genetically) isolated until 1788 is not yet certain.

What about the dingo? The latest genetic research suggests it may have come from New Guinea or even directly from Taiwan by Austronesian speaking people, with no indications of India ancestry whatsoever.

The burden of proof lies with those proposing the idea of a link between some Indigenous Australians and far away India, because the alternative view is the one that receives support from other kinds of evidence.

Also, I think it’s way too easy to ‘cherry-pick’ the physical anthropology, linguistic and archaeological literature, as geneticists are prone to doing, when the picture emerging from all these areas of research is much more complicated than most geneticists would concede.

Still, we’ve come a long way since Huxley’s insightful speculation, and who know’s whether he’ll ultimately be proved right.