One student’s LinkedIn journey across America

Harnessing connections with UNSW alumni has allowed business student Jason Peng to turn an invitation to a Harvard conference into an amazing networking opportunity. 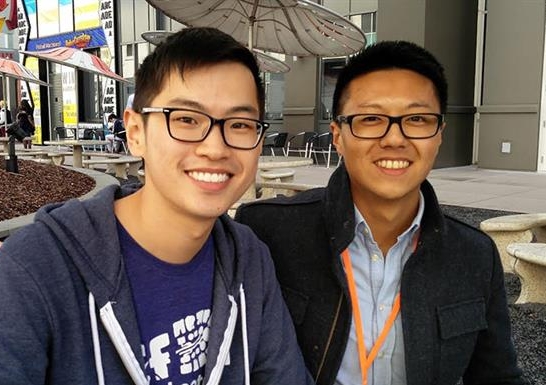 When UNSW Business School Co-op (Hons) scholar Jason Peng was invited to participate in Harvard University's 2016 Project for Asian and International Relations (HPAIR) conference, he knew he could turn one amazing opportunity into many. Instead of just travelling to Cambridge, Massachusetts to attend the conference, Peng decided to use the trip as a platform to network with UNSW Business School alumni working in his choice field: Technology.

"I was going to meet some of the world's greatest minds at the HPAIR conference. Why limit myself to the conference I thought. So I decided to meet as many interesting people as possible; people who could provide me with career advice and insights."

Instead of going it alone, Peng decided to bring his younger brother Jeff along so he too could be exposed to new ideas and learn from the experiences of others. "Being able to share this trip with my brother was a real joy and I knew it would also help him focus on his future career options."

"I reached out to about a dozen people working in the tech industry – all with different backgrounds. I wasn't sure if anyone would respond, but to my surprise almost everyone did. They were more than happy to connect with me. I then set-up in-person meetings to build upon the conversations started on LinkedIn."

Peng's meetings didn't take place at the local coffee shop or deli. His new found connections invited him to their places of work. Peng got an inside view of some of the world's most prestigious and enviable workplaces.

"Facebook was the most memorable. One minute I'm talking about how to gain the skills necessary for a career in data science and the next I'm passing Mark Zuckerberg in a corridor. It was both mind bending and eye opening. Being in that environment helped me look at my career options in a new light. I began to re-position myself and my goals. I had clarity."

Peng's connections also introduced him to their connections. He met the former Director of IT for Facebook, now the Chief Technology Officer at ENJOY Inc., and 19-year old Thiel Fellow and founder of Ranomics, a bio-tech startup that sequences DNA looking for health risk factors.

With a week's worth of networking under his belt, Peng's next stop was Harvard. Peng participated in HPAIR, a conference spanning four days that brings together students, academics, business professionals, and political leaders to discuss the most important economic, political, and social issues relevant to the Asia-Pacific region. In between panel discussions and meetings with ambassadors, Peng continued his pursuit of networking.

A meeting with a UNSW Business School alumna studying for her MBA at MIT Sloan led Peng to attend Demo Day, an invitation-only event where MIT students pitch their startup ideas to investors and the media. Peng also connected with an alumnus working at Google whose code can be found in every Pixar movie.

"My advice to fellow students - take risks. When I sent those first messages through LinkedIn I never expected the responses I got, let alone the experiences it led to. The alumni I met were generous with time and advice. I'm very grateful that I'm part of such an engaged community of graduates."

Peng also recommends that students looking to follow in his footsteps prepare before they reach out to new connections. "Think about what it is you want. What are your career interests? Where do you see yourself in the future? How can the experiences of the person I am contacting provide me with new insights? How can I learn from them?"

"And most importantly," Peng says, "believe in yourself and go for it."

"Confidence can take you anywhere. It can open new doors and motivate you. If you situate yourself globally – going where innovation is upending the system – that belief in yourself will help you step out of your comfort zone and into something transformative."

Jason Peng spent a decade living in Shanghai. He is in his final year at UNSW Business School, studying for his Bachelor of Information Systems (Hons). He is always looking for new connections and can be reached via LinkedIn.