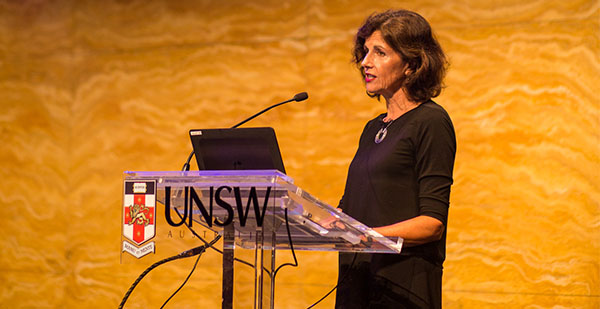 The 2016 Utzon Lecture series launched on Wednesday 9th March with over 600 guests attending the inaugural lecture given by the new Dean, Professor Helen Lochhead.

Professor Lochhead’s talk was titled Re-Imagining the Harbour City and gave a fascinating insight into the history of harbour development and the shaping of public spaces on the harbour foreshore.

The Utzon Lecture Series was officially launched in March 2010 by Jan Utzon the son of the renowned Danish architect Jørn Utzon.

Held on a monthly basis at the University of New South Wales (UNSW) Kensington campus in Sydney, the Utzon Lecture series focuses on the presentation of ideas from leading contributors of international significance in the design, delivery and management of the built environment.

Following tradition, the first Utzon Lecture every year is also named the Paul Reid Lecture in Urban Design. The late Paul Reid was Chief Architect at the National Capital Planning Authority where his most important role was the organisation and building of the New Parliament House and the first definitive study of the Griffin Plan. At UNSW he is remembered and valued as a Professor of Architecture and a founding member of the Master of Urban Development and Design (MUDD) program.

The master of ceremonies, Professor James Weirick, Director of the MUDD program, presided over a record crowd of 600 guests, VIPs, sponsors and staff at the Leighton Hall theatre in the Scientia Building. In fact, there was standing room only.

Above: Director of the MUDD program, Professor James Weirick, presenting the MUDD students with their achievement awards.

The evening kicked off with a champagne reception for VIPs in the Gallery of the Red Centre building, home to the Built Environment faculty. After brief speeches by Professor Lochhead and Hubertus Legge, Deputy Consul-General, Federal Republic of Germany (who very kindly donated 70 litres of Beck’s beer!) the guests moved to Leighton Hall where the main lecture took place. Afterwards Professor Weirick and Commissioner Hoffman presented outstanding MUDD students with achievement awards (see below for full details) and then guests were invited back to the Red Centre Gallery for another champagne reception to celebrate the opening of MUDD’s 21st exhibition, MUDD21 CITY VISIONS II: Method & Design – Berlin | Chicago | Sydney which showcases student projects that are a result of working closely with industry professionals and UNSW academic staff in these three cities. The exhibition is open to the public until March 31st, 2016.

See below for image galleries.