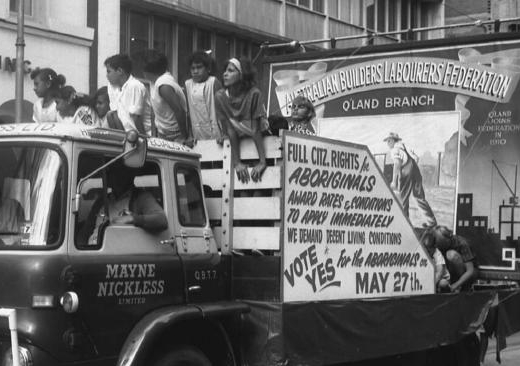 REVIEW: The founders of the Australian nation saw no place for Aboriginal and Torres Strait Islander peoples. Instead, these peoples were cast as outsiders in their own land, a “dying race” not expected to survive British settlement. The Australian Constitution that came into force in 1901 incorporated these sentiments. When it spoke of indigenous peoples, it did so only in negative terms, such as by providing that they could not be counted in reckoning the commonwealth’s population.

Australia’s constitutional structure was soon reflected in the nation’s laws. One of the first acts of the new federal parliament was to exclude Aboriginal peoples from the franchise. This operated until 1962, but even then Aboriginal people were not conferred the right to vote on the same terms as other Australians. Voting became compulsory for them only in 1983.

Many indigenous advocates have devoted their lives to fixing these problems. They have sought belated acts of nation building to bring about an inclusive and equal society. As Noel Pearson remarks in a typically forthright and stirring foreword, these advocates have tended to seek allies from the political Left. A key aim of this book is to challenge such assumptions. Indeed, as Pearson’s journey demonstrates, strong leadership and support have often emerged from conservative political figures.

This should come as no surprise. Conservative leaders and thinkers have not undergone a recent conversion to the cause. Instead, from the early years after Federation, people from the Right have also pointed out the injustice of these arrangements, and promoted change. Hence, Aborigines were first extended the vote under the Menzies government, while a referendum to remove some of the discriminatory clauses from the Constitution was passed in 1967, when Harold Holt was prime minister.

In more recent times, John Howard put indigenous recognition on the national political agenda by proposing that Australians vote on a new preamble to the Constitution at the 1999 republic referendum. If passed, the Constitution would have contained words “honouring Aborigines and Torres Strait Islanders, the nation’s first people, for their deep kinship with their lands and for their ancient and continuing cultures which enrich the life of our country”. Tony Abbott also professed a strong personal commitment to the reform. He described himself as Australia’s first “prime minister for Aboriginal affairs”, and said that he would “sweat blood” for the cause.

The Forgotten People is a further important contribution to this debate. It signals an ongoing commitment and intellectual contribution by a leading cast of conservative figures to the goal of changing the Australian Constitution to recognise indigenous peoples. Their support is vital. If anything is demonstrated by Australia’s dire referendum history, in which 36 of 44 proposals have been rejected, including every proposal put since 1977, it is that no reform can succeed without the backing of both the Left and the Right in Australia.

The result is not a cohesive argument but a myriad of perspectives and ideas. This is a product of the current debate, which, despite having run for the best part of two decades, has yet to produce a model for change. As a result, many of the essays focus on this issue, and in doing so articulate how the Constitution can be changed while still retaining its underlying character. The goal is to achieve a new defining moment in Australia’s history without fracturing Australia’s constitutional structure.

Some central ideas do emerge, including scepticism about more substantive changes in the Constitution, such as by the insertion of a provision for freedom from racial discrimination. Strong support is also voiced for the idea championed by Pearson of a new body composed of indigenous peoples to advise the parliament. These ideas have already been well ventilated in public debate, and indeed here the book has little new to offer.

The essays also discuss the difficulties of achieving change, reminding readers of past failures and the need to encompass conservative perspectives. The mood is one of caution rather than confidence. This note is certainly appropriate. Australia cannot afford to hold a referendum in which the people vote against recognising indigenous Australia. This would be a devastating blow to Aboriginal peoples, and to the task of unifying the nation.

The authors are right that any enthusiasm for constitutional change must be tempered by the realities of the referendum record. After all, Australia’s longest serving prime minister, Robert Menzies, never won a referendum, although he came close in 1951, when the people narrowly rejected his proposal to confer new powers on parliament to deal with communism. Menzies was left bitter and dejected, reflecting: “The truth of the matter is that to get an affirmative vote from the Australian people on a referendum proposal is one of the labours of Hercules.”

George Williams is Professor of Law at UNSW and the co-author of Everything You Need to Know about the Referendum to Recognise Indigenous Australians (NewSouth Publishing, 2015).

This review was first published in The Australian.