Turnbull’s plan to fix the federation is bold – but can he deliver?

Recent history tells us that we should be cautious about newly minted prime ministers promising to fix the federation, writes Paul Kildea. 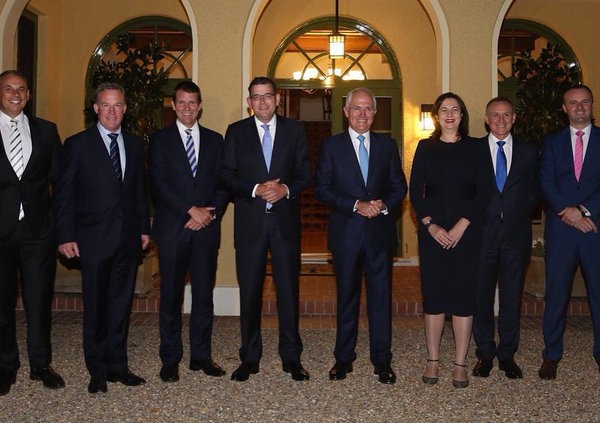 OPINION: The lead up to this year’s first Council of Australian Governments (COAG) meeting has been dominated by Prime Minister Malcolm Turnbull’s surprise proposal to allow the states to collect a share of income tax. Turnbull has called it “the most fundamental reform to the federation in generations”.

But the states are approaching this idea with caution, for good reason. They are accustomed to prime ministers talking big about fixing the federation and then failing to deliver. They will also want to know how changes to income tax collection will address the looming crisis in health and education funding.

Reforming the federation: a recent history

By making a bold proposal on federalism early in his tenure, Turnbull is following in the footsteps of two of his recent predecessors.

Kevin Rudd famously pledged to end the “blame game” between federal and state governments, and worked with the premiers to simplify financial relations in a way that enhanced accountability. But his early successes were soon derailed by the reinstatement of conditional grants and an increasingly unilateral approach on health reform and the mining tax.

Tony Abbott sought to leave his mark on the federation as prime minister by establishing a white paper process on federal reform. Like Rudd, Abbott was concerned about the overlap and duplication that have long blighted the Australian federal system, but his proposed solution was different. He wanted to clarify roles and responsibilities to ensure that states and territories were “sovereign in their own sphere”.

The 2014 budget made it brutally clear to the states what Abbott had in mind. The Commonwealth announced that it was withdrawing A$80 billion in health and education funding that had been pledged to the states by the previous Labor government. Restoring state “sovereignty”, it seemed, involved the federal government backing out of areas of shared responsibility, particularly those that carry a hefty price tag.

Behind this was a big idea of some kind – a desire to move away from the “co-operative federalism” espoused by the early Rudd government, and make federal-state relations more competitive. But Abbott never explained how the states could possibly cover the funding shortfall created by the budget announcement.

It is a basic reality of Australian federalism that the Commonwealth collects most of the taxation revenue (around 80%), and this makes the states reliant on federal grants to meet its spending obligations. NSW Premier Mike Baird accused the federal government of “outsourcing” the crisis in hospital and school funding to the states.

The Abbott government’s withdrawal of health and education funding placed federal-state relations under strain, and any goodwill that had existed around federal reform quickly dissipated. The white paper process appears to have stalled.

The federation under Turnbull

Two years on, disagreements about how to fund hospitals and schools continue to dominate federal-state relations. South Australian Premier Jay Weatherill has been particularly vocal over this period. He recently advocated for a rise in the GST to help cover healthcare costs, but the idea failed to attract broad support.

Turnbull’s intervention has unsurprisingly attracted a lot of attention. The Commonwealth seized control of income tax in 1942 and the states have not collected a cent of it since. Not since Malcolm Fraser has a prime minister offered the states a concrete opportunity to raise revenue through income tax.

There are two major benefits to Turnbull’s proposal. First, it would improve accountability in the way that taxation revenue is raised and spent in the federation. The states’ current reliance on federal money muddies accountability by making it impossible to know who to blame for failures in service delivery.

Second, it could enhance the capacity of the states to meet the growing costs of health care and education. The amount of revenue collected through income tax is likely to grow over time, and state governments may feel more motivated to spend their money wisely if they are the ones collecting it.

Both of these benefits would be very welcome. But, while Turnbull’s ambition is laudable, there are several reasons to treat his proposal with caution.

First, it is unclear if it will result in more money being available to spend on hospitals and schools. Offering states incentives to increase efficiency will help, but the benefit may only be marginal. Once states are able to alter their income tax rate, some may increase it and spend the windfall on health. But, equally, some governments may choose to reduce the rate with the result that hospitals ultimately receive less funding.

Second, states with smaller populations, such as Tasmania and South Australia, may be disadvantaged by a shift in income tax arrangements. Any new system would have to introduce some measure of fiscal equalisation to cater for this.

Third, Turnbull’s proposal remains light on detail. The last COAG meeting in December agreed to investigate “a full range of Commonwealth and state tax and revenue sharing options”, but this week the premiers were still waiting to see a detailed written proposal.

Key information, such as the amount by which federal income tax would be reduced, is not available. This reflects the weaknesses of developing a major reform idea outside of established and collaborative processes such as the white papers on federal reform and taxation.

Recent history tells us that we should be cautious about newly minted prime ministers promising to fix the federation. At the same time, we should not allow cynicism about the prospects of federal reform to smother a good idea.

One thing is clear – if Turnbull’s bold tilt at reforming the federation is to succeed where others have failed, this week’s COAG meeting will just be the beginning of the process.

Paul Kildea is a lecturer in the Faculty of Law and Referendums Project Director at the Gilbert + Tobin Centre of Public Law at UNSW.