We need to equip the next generation with the skills to deliver Australia a space-based future, writes Solange Cunin. 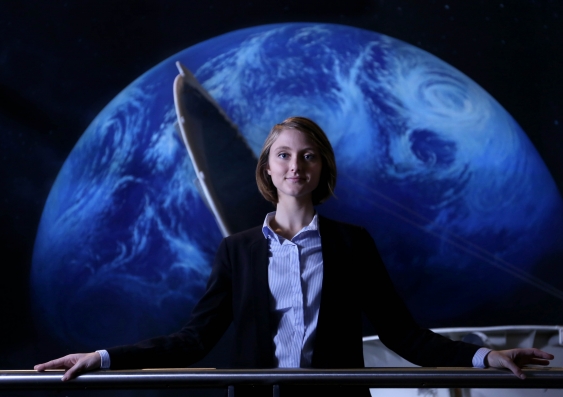 The International Space Station is one of humanity’s greatest engineering triumphs, yet Australia has never had a science experiment included in this incredible laboratory.

As an aerospace engineering student and space entrepreneur, I find this sad and disconcerting. How could Australia, a technologically adept and prosperous nation, be stuck on the outside looking in?

After the initial shock subsided, however, I decided to take things into my own hands.

It meant my company, Quberider, had the opportunity to do something no Australian individual or entity had ever done.

In June, we will deliver on behalf of Australia a small payload to the ISS. It will fly on a SpaceX cargo vessel, launched from Cape Canaveral in Florida, and over several weeks its data-driven science experiments will be tested by NASA astronauts.

This is a monumental achievement for Australia’s commercial space industry, which is beginning to find its feet. (And not a moment too soon!)

And perhaps what’s most exciting is that all the experiments are being developed by hundreds of high school students across New South Wales, with help from their tireless teachers.

These classrooms have taken part in the inaugural Quberider space program, which teaches students to code, analyse big data, think critically, and design creative solutions. It’s aimed at turning Australian high school students into real-life rocket scientists; getting them engaged in STEM subjects by including them in a space mission.

When I founded Quberider with my friend Sebastian Chaoui in 2015, our objective was simple: improve access to space.

As space geeks, we envisioned a future where space access was common place, and not dominated by big companies or space agencies. So we decided to set up a ride-sharing service, to lower the cost of launching small-scale payloads and software-based experiments into space. In doing so, we uncovered a more fundamental problem: a massive gap in the skills and motivation for engaging with space in Australia.

As a result, our business morphed to include a plan around high school education. The merit of this new path was validated when we were accepted into Telstra’s start-up accelerator program. The accelerator has enabled us to grow our business, and marry our vision for space with our passion for education.

The importance of a STEM-literate workforce in our increasingly technology-driven economy cannot be underestimated. As industries innovate and try to keep pace with automation and the next disruptive technology, they are demanding workers with 21st century skills. Yet in Australia, the number of students doing intermediate and advanced mathematics in secondary school has fallen by 34 per cent in 18 years, according to the Australia Industry Group

So how can we right the ship?

In my opinion, giving students a space mission is one of the best ways to get them engaged with STEM. It has been amazing to see the energy that students have thrown at our program, and inspiring to watch them realise that being part of a space mission is not beyond their potential. Indeed, with the right support, it’s very much within reach.

Teachers have also been heroic, and should be commended for taking up the program in their schools. We now have a waiting list of schools wanting to join the program, which is an early indication of its success.

But the journey to launch Australia’s first ISS-bound payload has not been without difficulty.

To its credit, the federal government has helped us navigate through its archaic policies, helping us fulfil the certification process required for all Australian space activities. It realises the great potential the program has. But if the government is serious about innovation, a lot more needs to be done to enable other small- and medium-sized businesses to capitalise on commercial space opportunities in a meaningful way.

The global space industry has been growing so fast it’s now congested, with hundreds of ventures springing up in recent years, focused on everything from earth observation, to space tourism and asteroid mining. And this astronomical growth is projected to continue. It’s the perfect time for Australia to enter the game.

The government is in the midst of rewriting its space policy, which will hopefully eliminate the hoops we have had to jump through to launch a legal payload, and make it easier for others to do the same.

We will proudly watch the launch of the country’s first payload to the ISS in June, but we will not rest on our laurels. This is the first of many: our goal is to give every Australian high school student at least one space mission each year.

It’s not implausible. And indeed, it is something as a nation we should all strive for: to equip the next generation with skills they need to deliver Australia a space-based future.

Solange Cunin is an aerospace engineering student at UNSW and the cofounder of space startup Quberider.

This opinion piece was first published in StartUp Daily.