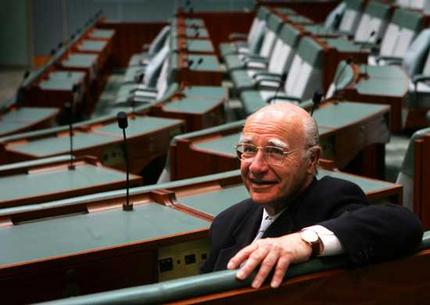 Above: Model of the Red Centre building at UNSW. Image: Richard Francis-Jones, MGT Architects, UME 5.
Aldo, as he preferred to be called, was born in Rome in 1920 and educated at the School of Architecture, Rome University where he graduated with a Bachelor of Architecture degree in 1948 summa cum laude (with highest distinction). He then studied architecture at Columbia University as a Fulbright Fellow, receiving a Master in Architecture in 1951. He founded his own firm in partnership with Ehrman B. Mitchell, Jr. in 1958 in Philadelphia and together opened an office in New York in 1969. Under his leadership in design, the firm would complete a large number of projects throughout the world, with major clients including IBM in the US, Volvo in Sweden and sixteen major American universities including Princeton, Columbia, UCLA and Massachusetts Institute of Technology. In 1969 he was appointed Ware Professor of Architecture at Columbia University, where he was also Chairman of the School of Architecture. In 1980 Aldo won the competition for the New Parliament House in Canberra and decided he would make Australia his home.

For Aldo, who would move from Rome to the United States, living in Philadelphia and New York working in various cultural contexts: American, European, Asian and Australian, the practice of adaptation would be something innate. In his conversations, Aldo always suggested that adaptation is part of being Italian, "It is the result of historical circumstances, of the many adaptations of Italy to so many different political dominations. We had the French, the Spanish, the Austrian domination…so it is not difficult for us to adapt to new aspects of life." This special ability to adapt is comprised of many different things including his sense of identity, of belonging to a certain place and a culture.

In relation to this Aldo stated that: 'I found myself at home in many places. I feel at home in every place where I have my work and where I work with a culture." Among the most significant buildings he would design in Australia are the New Parliament House in Canberra (1987), St. Thomas Aquinas Parish Church in Charnwood (1990), the Red Centre, University of New South Wales (1997), John Niland Scientia Building also University of New South Wales (1999), Adelaide University's South Campus (2003),  St. Patrick Cathedral in Parramatta (2004) and York Park, Canberra (2007).

Aldo contributed to the architecture program of our faculty as the invited lecturer in the Migrant Architects Workshop (2007) and as the invited guest critic during the final presentation of master students projects (2007-2008).

In 2000 UNSW Built Environment organised a symposium: Romaldo Giurgola Symposium to honour the architect in his eightieth year.