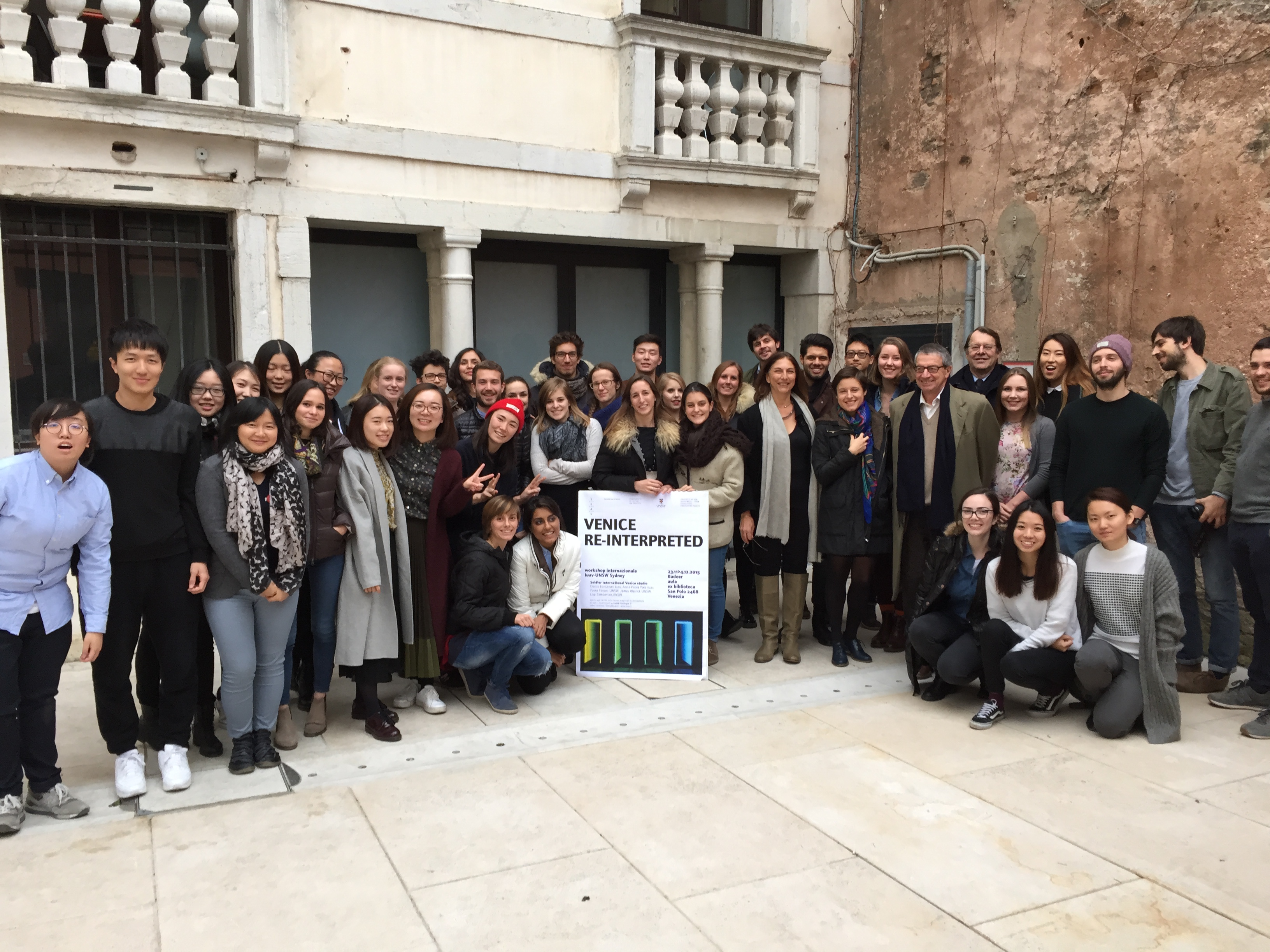 Click on the image below to view the full picture gallery including student work.

Venice, the capital of Italy’s Veneto region in the north, is built on more than 100 small islands in the Adriatic Sea. It’s a city with no roads or cars, only canals and boats and has for centuries enchanted residents and visitors alike.

This second Seidler International Studio, was called Venice Re-Interpreted and involved the students investigating Venice’s historical urban forms and urban typologies as well as selected modernist and contemporary projects. Students redeveloped the semi-abandoned south end of Giudecca Island into a new residential and culturally rich city proposing it to be a new gateway for Venice.

The Seidler Studio included the opportunity to visit the Biennale of Art at The Giardini, meaning “the Gardens” which has been the site of the exhibition since 1895. A number of art installations and exhibitions within splendid historical palaces, churches and contemporary adaptations of heritage buildings were visited by the students.

“The cultural enriching experience of living and studying in Venice is an invaluable opportunity for Built Environment students as they are exposed to international current ideas in art and architecture within a historical city. Students meet other students and lecturers in Venice and start their international address book with global built environment colleagues,” explained Dr Paola Favaro, Senior Lecturer, Architectural Studies at UNSW and one of the studio’s teaching staff.

The Seidler International Studios are sponsored by the Seidler Architecture Foundation and are influenced by the Australian architect Harry Seidler’s design principles and inspired by Seidler’s travel photographs as collected in the volume The Grand Tour, Travelling the World with an Architect’s Eye and his hand-drawings collected at the NSW State Library in Sydney.

UNSW Built Environment spoke to some of the students who went to Venice and asked them about their experiences there and what they learnt.

The Seidler International Studio is a two week interdisciplinary course undertaken in the city of Venice where students were challenged to analyse the very unique urban morphology of Venice and draw objective conclusions to inform the Studio's culminating activity, a design proposal for the inhabitants of Giudecca Island.

The Studio provided students with an array of skills to "travel the world with an Architect's eye" and laid essential groundwork for further personal study beyond the bounds of the course.

Needless to say, the Studio fostered a culture of continual life-long education and the value of collaborative scholarship - an enriching experience that students would quickly appreciate and carry forth in travels subsequent to the course.

On behalf of the studio, I would like to thank Dr Paola Favaro, Lisa Zamberlan and our Italian hosts Dr Enrico Fontanari and Dr Anna-Paola Pola for their guidance and putting together a very compelling Studio. I would also like to extend our gratitude to guest critic James Weirick for his time and contributions to the design proposal critiques.

This two week studio has been one of the best elective and experience I have had throughout either of my degrees. The location of Venice couldn't be placed any better, it's such a fabulous city.

First of all, the trip itinerary was wonderfully planned with three days of biennale and gallery sight-seeing prior to the start of the studio. This way we managed to obtain a good amount of knowledge on Venice. Secondly, the whole 16 days we were there, I truly felt like a resident of Venice instead of a tourist because of the wonderful Italian students we had the pleasure of knowing and our daily studio routine. Last but not least, the help and inspiration Paola, Lisa and the Italian professor Enrico brought to us were definitely the highlight of the trip. Your passion for teaching and design has inspired all of us.

Thanks again for bringing all of us together to this wonderful city of Venice, the friends we made here are for life. I couldn't have wish for a better way to end my studies at UNSW.

Fun facts: Only in Venice!