Former ABC managing director Mark Scott has been awarded an honorary doctorate in recognition of his eminent service to the community. 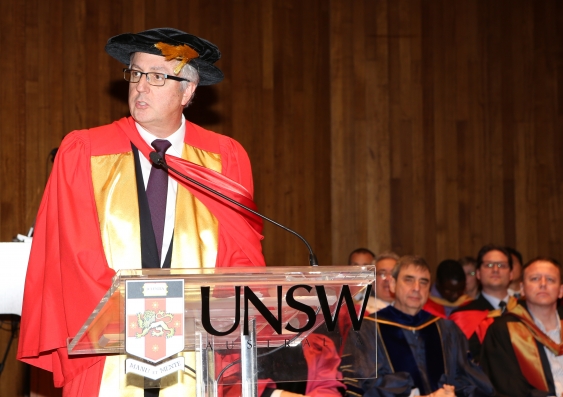 Former ABC managing director Mark Scott has been awarded an honorary doctorate in recognition of his eminent service to the community.

Scott is a long-standing member of the UNSW Business School Advisory Council and Executive Committee.

He was recently appointed secretary of the NSW Department of Education, was awarded an honorary Doctor of Business for his eminent service to UNSW and the community.

Reading Scott's citation UNSW Chancellor David Gonski AC described him as 'a visionary leader who boldly transformed the ABC from a traditional media organisation into a leading player in Australia's new media and digital landscape'.

Scott engineered extensive changes to the broadcaster with the introduction of ABC News 24, Australia's first free-to-air 24-hour news channel; ABC 3, a digital TV channel for children, and a major expansion into digital and online technology which included the roll out of digital radio.

He was named an Officer of the Order of Australia in 2011 for his distinguished service to media and communications, and to the community through his advisory and governance roles with a range of social justice and educational bodies.

Scott provides advice to the Dean as part of the UNSW Business School Advisory Council, and interviews high profile business CEOs as part of the School's flagship alumni event series, Meet the CEO.