When asteroids pass closer than the Moon

As gazes turn skyward for International Asteroid Day, a team of engineers from UNSW are completing their start-up mission to bring you more information about near-Earth space rocks. 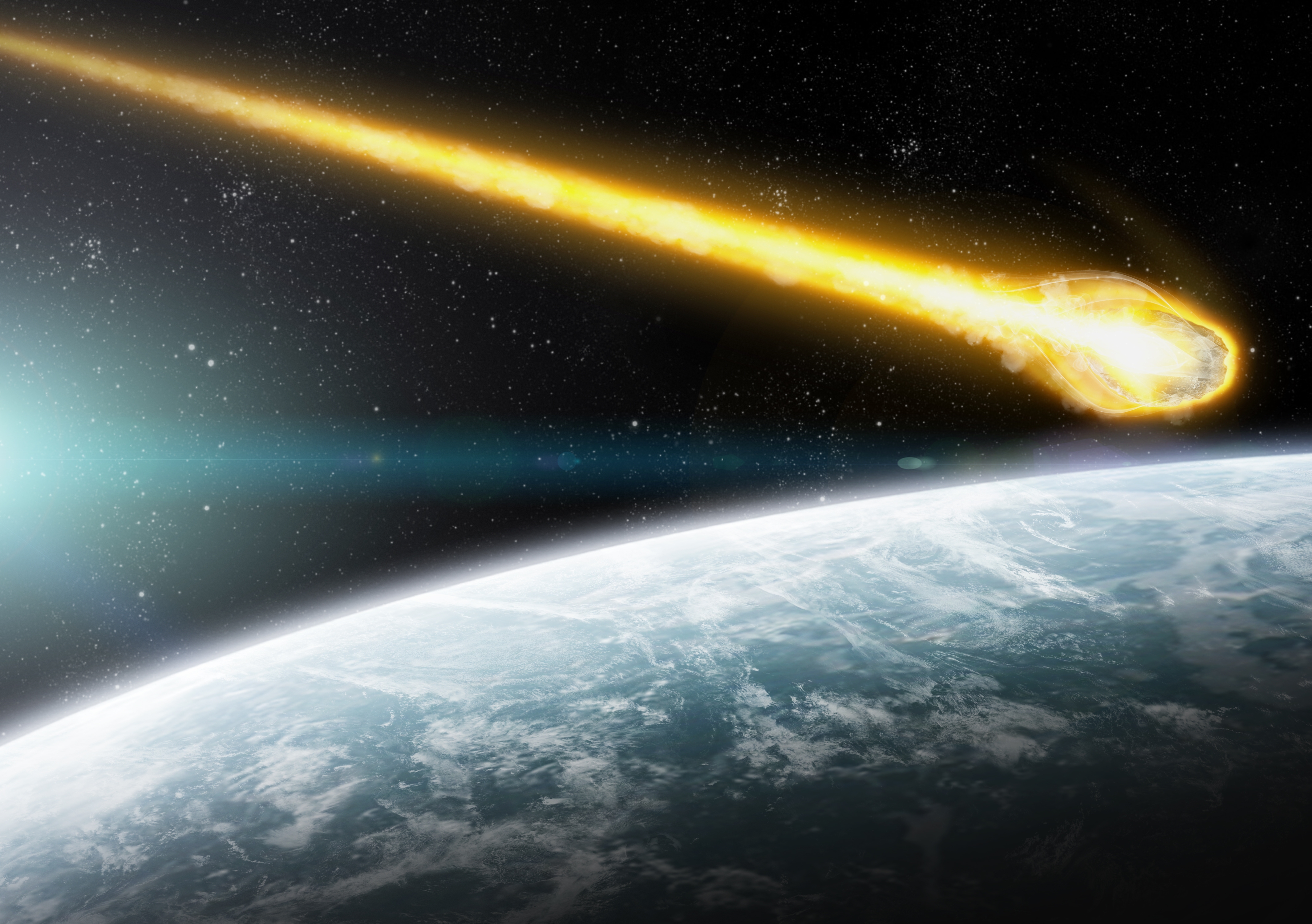 As gazes turn skyward for International Asteroid Day on 30th June, a team of engineers from UNSW will complete their mission to make information about space rocks more accessible.

The UNSW PhD candidates are developing a website and mobile app that alerts users to the existence of very near-Earth asteroids – those passing perilously close – as soon as they’ve been discovered.

“Each year roughly 40 asteroids that we know of race past the Earth at distances closer than the moon,” says William Crowe, co-founder of the space start-up Higher Earth Orbit Robotics.

These asteroids pose the greatest risk of collision, but are also the best candidates for future mining missions to collect either rare minerals or water for fuel production in space.

The European Space Agency’s iconic Rosetta space probe, which landed on a comet in August 2014, took 10 years to reach its target. But reaching an asteroid passing between the Earth and moon would take just a few days, says Crowe.

“It’s much faster and more affordable to reach these very near-Earth asteroids.” 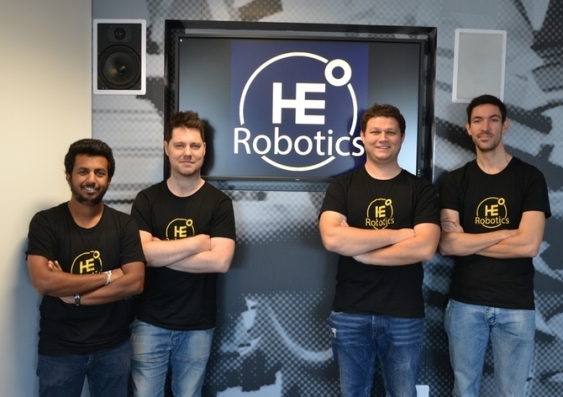 The International Astronomical Union sends a notification to scientists as soon as one of these asteroids of concern is discovered.

One of the challenges, however, is wading through the jargon, says Crowe: “It’s really just a bunch of letters and numbers. It’s very hard to find easy-to-read information on these asteroids.”

To overcome this challenge, Crowe and his team have developed an app that translates complex information about these newly discovered space rocks into visual info-graphics, with information about the asteroid’s relative size, its mass, energy, and estimates about the mineral and water resources it might harbour.

These user-friendly alerts are then relayed to subscribers just 30 minutes after the official discovery notice.

“It's important that people can find and understand this information easily, as worldwide asteroid detection and follow-up efforts rely heavily on amateurs,” says Crowe. “So the more people that are involved the better.” 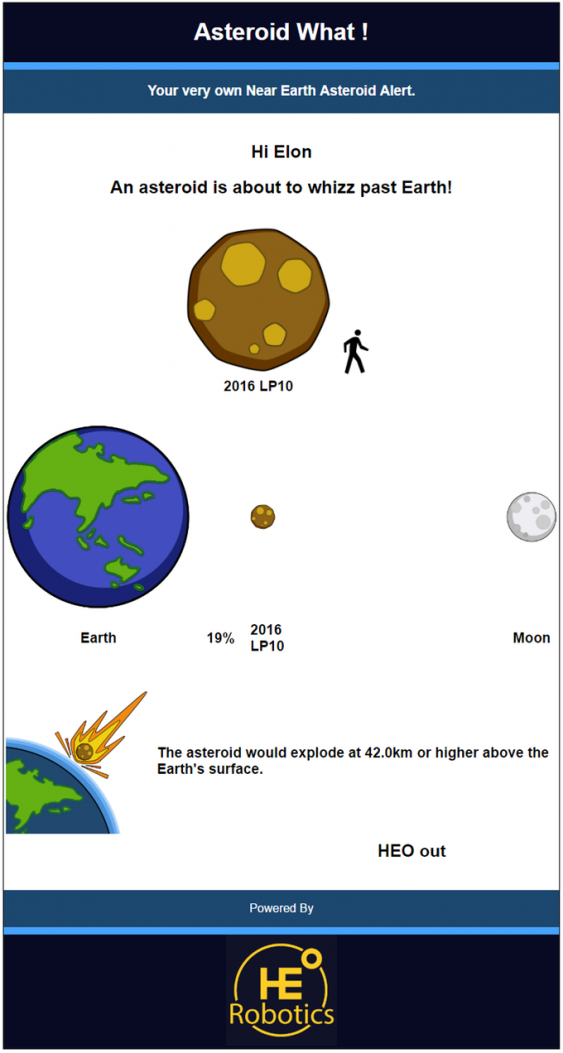 How the alert would look.

The High Earth Orbit Robotics team has launched a Kickstarter campaign to fund the final stages of development, and are already more than 90% of the way to their target. The campaign ends this week, on International Asteroid Day (30 June).

Crowe says people should take a keen interest in asteroids because space is a domain that belongs to all of us.

One of the guiding principles of the 1967 Outer Space Treaty is that space “shall be the province of all mankind”.

“There really needs to be more awareness about what’s going on in space,” says Crowe. “If people do start mining, and this is our heritage, we need to be aware of these activities.”

Asteroid mining is a potentially lucrative industry, with entrepreneurs and governments around the world investing in new technologies to make it a reality.

Crowe says there’s an enormous economic opportunity for Australia if it can get involved, particularly in the key area of earth-based asteroid detection.

“We have a huge advantage over other countries because of our geographic location and vast areas of remote land. It means we can do a range of asteroid detection and investigation from Earth that a lot of other countries can’t do,” he says.

“We already have a lot of the infrastructure in place. Australia is littered with telescopes that can be used for this purpose.”

Australia’s Siding Spring Survey was the only professional search for near-Earth asteroids in the southern hemisphere, but ended in 2013 due to funding cuts.

Crowe, who is completing his PhD at the Australian Centre for Space Engineering Research at UNSW, has been investigating the feasibility of using swarms of small spacecraft to characterise near-Earth asteroids.

While these are the most feasible for mining, there are still major barriers to operating small spacecraft in the harsh environments these asteroids pass through.

Most satellites operate in low-Earth orbit, where they are safe from extreme radiation, can more efficiently communicate information to Earth-based receivers, and can use the Earth’s magnetic field to stay stable. In high-Earth orbit, these luxuries don’t exist, says Crowe.

High Earth Orbit Robotics has begun to develop a range of new technologies at the Michael Crouch Innovation Centre at UNSW. They have been testing these systems in high-altitude balloon flights, which simulate the space environment.

Crowe says his team started the company because they wanted to cultivate their own job opportunities in Australia, which has traditionally lacked a visible space industry.

“We’d love to work in Australia, but there’s still a possibility that we’ll need to go overseas to find work in the future. This is the hard reality for many aerospace engineering graduates in this country,” he says.