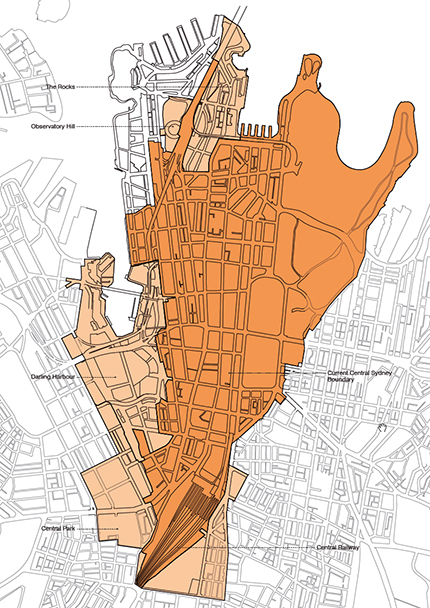 The highly anticipated Central Sydney Planning Strategy, a result of three years' intensive research, was released mid-July and designed to be the guide for Sydney's growth over the next 20 years. It is described as the most comprehensive urban planning strategy for the city since 1971.

Under the draft plan, buildings could potentially soar to over 300 meters in height, up from the current restriction of 235 meters, in dedicated "tower cluster" areas around Haymarket and The Rocks, and near Circular Quay and Barangaroo. According to the city council, this is to maintain essential sun access to important public areas such as Hyde Park, the Royal Botanic Gardens, Martin Place and Wynyard Park.

Besides encouraging business to go upwards, the plan, which includes 10 key moves in total, also proposes to expand Central Sydney to include The Rocks, Darling Harbour, parts of Ultimo, and Central Railway to Cleveland Street.

Additionally, it requires that all future developments over 55 meters in height have at least 50% of floor space designated for office, hotel, retail or other commercial use.

Lord Mayor Clover Moore said in a statement that the proposal would unlock 2.9 million square meters of additional commercial space.

"Past planning strategies have successfully increased the number of residential buildings in the city center, but now we need to protect and increase the amount of productive floor space to maintain Sydney's economic vitality and resilience," Moore said.

Sydney accounted for roughly a third of Australia's GDP growth in 2014-2015, a report by SGS Economics and Planning found. Central Sydney acts as the city's commercial heart with a high concentration of financial institutions and shopping centers. Official data shows that the City of Sydney population is forecast to swell by nearly 33% in the next 20 years.

To accommodate its growth in the long run, the city does need a revitalization of its planning law and more height, Andrew Ballantyne, JLL's head of strategic research Australia, said in an interview.

"Sydney has got water or the harbor on the west and the north, and then it has a green wedge, comprising the Botanic Gardens and the Hyde Park, on the east. With three natural boundaries, Sydney can only go south, but it's very difficult to do so because you will get into what is already residential and areas of strata titles," said Ballantyne.

While the provision for taller buildings has been generally welcomed by industry experts, some have flagged concerns over other areas of the new planning strategy.

Chris Johnson, CEO of developers lobby group Urban Taskforce, took aim at the potential increased costs to developers, as the draft recommends that any planning gain resulting from increased development potential must be shared between the land owner or developer and the public to fund infrastructure delivery.

"The Sydney CBD strategy continues a trend with Sydney councils to set height limits but to then trade off extra heights for financial contributions to infrastructure. Value capture has become the new buzz word but every council has different rules," he said in a statement.

Johnson also pointed out that the strategy seems to be discouraging residential development. "The strong preference is for commercial towers. Residential only towers are not allowed. This approach will have an impact on the physical shape of the city with fatter commercial towers rather than slim residential towers," he said.

For office landlords specifically, the 2.9 million square meters of new commercial space to be added might dampen their prospects of benefiting from a lack of supply in the CBD area. "Generally speaking, new supply is a negative because it limits your effective rental growth, due to the pressure on vacancy," CLSA real estate analyst Sholto Maconochie said in an interview.

But the analyst quickly added that landlords are still safe in the short term, as changes in planning rules may take a while to be implemented and the new supply is unlikely to hit the market at the same time.

At the moment, central Sydney is very much a landlord market, with the current office development cycle expected to peak in 2016 and with limited new projects coming online in the next three years, JLL's Ballantyne said.

The market might shrink in the next couple of years due to a number of withdrawals, he added.

These include several older office assets earmarked for conversion to residential or hotel use over the medium term and around 20 buildings being compulsorily acquired by the government to make way for the Sydney Metro infrastructure project.

It is essential for the next generation of tall buildings in the CBD to be mixed-use to create a diversity of use and a 24-hour cycle, according to Philip Oldfield, a senior lecturer in the Faculty of the Built Environment at University of New South Wales and a member of Council on Tall Buildings and Urban Habitat.

"Take the City of London for example, 95% of it is office space. At nights or weekends, it's kind of dead and lacks vitality. You don't want that to happen in Sydney CBD. So a degree of residential, hotel or mixed-use is really important," said Oldfield, whose research interests are focused on sustainable high-rise architecture.

He also points out that future supertall towers should not just create a "vertical banality of stacked office floors," but match the increase in height with a generosity of public space on the street level. "Because much of that floor space a developer would be creating is private and out of the public realm, the best place to give something back is on the ground," Oldfield said.

There are examples in other global financial hubs that tall buildings can be generous, according to Oldfield. Standing at 95 stories, The Shard in London integrates the tower with the train station and a big public area. In Hong Kong, the ICC has a generous internal plaza within the tail of the building which also links to transit.

While the new planning strategy for Sydney is still in draft and amendment stages, the final proposal is scheduled to be placed on public exhibition around the end of the year.

Its expected timeline for finalization around 2017 is rather swift. However, for the Sydney skyline change will come slowly, as it has since the first tall towers came about in the 1960s. "I think it's going to be 10 to15 years before you'll see the impact of this planning strategy," said Oldfield.

Carl Dizon contributed to this article.

The above article was originally published on snl.com.