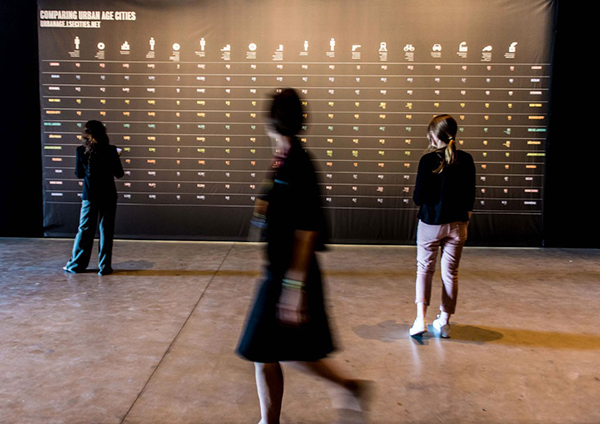 Hosted by La Biennale di Venezia and in partnership with UN-Habitat, the 2016 URBAN AGE Shaping Cities conference brought some of the most forward thinking and thought provoking architects and urban designers to speak about the current and future issues facing our cities. With cities facing huge population growth it is more important than ever that, as urbanists, we stay in touch with the issues facing both domestic and international cities.

The conference this year  large focus on policy making, density, diversity, migration and the top-down verses bottom-up approaches of design. There was also a focus on the preparation for Habitat III in Quito which will focus on a new urban agenda including how we will manage a global standard for sustainable urban development, management of our cities and the way we live in cities. The conference will be held in October this year. All large influencing factors such as migration, opportunity and need for further growth and expansion are shaping our cities. The conference had a major focus on European cities as well as African (Kampala, Uganda), South American (Bogotáà, Columbia) and East Asian cities.

Solving the Issues Facing our Cities

As stated by Joan Clos, the Executive Director of UN-Habitat, planned areas for cities are diminishing and are the lowest it has ever been. Urban expansion is happening at such a fast rate, that little planning is able to be carried out, with 98% of this urbanisation occurring in the developing world. These overwhelming concerns were addressed through the analysis of European and American developed cities, by addressing the focus as mentioned above and the general consensus was:

Of course, there are many more things we can do to ensure the successful design of our cities, but these topics were the main focus of the conference and clearly set out a starting point for those developing countries which have the largest amount of urbanisation occurring across the globe.

Urban design and its role in the future of the city.

Through attending the conference it is clear to see that each and every urban designer/architect has an idea of what a successful city means. So how do we bring all of the ideals of urban design together to create a cohesive strategy and set of principles for which governments, planners and designers can use to ensure our cities provide equality, opportunity and great spaces to the people who live in them? This is what Habitat III aims to achieve, a cohesive and clear urban agenda.

The conference provided great insight into some small and large scale projects that are aiming at addressing the issues focused on over the two days. Although all topics were completely relevant, it was a shame that there was not as much discussion on the natural environment of our cities, sustainable development and exemplar projects. In order to create successful cities, we must address the triple bottom line: social, environmental and economic issues.

It was also clear to see that among the urban design community there is still disagreement over what should be the driving force behind the design of cities and where we start. I am sure that the Habitat III document will address these gaps and contribute to a great urban design discourse and understanding on how we develop our cities both for people and the environment.

Above: A sminar at the URBAN AGE Shaping Cities conference. Photo: Catarina Heeckt.